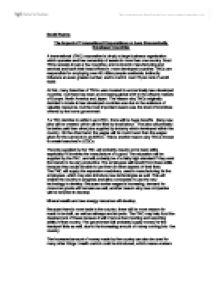 The Impact of Transnational Corporations on Less Economically Developed Countries

David Pearce The Impact of Transnational Corporations on Less Economically Developed Countries A transnational (TNC) corporation is simply a large business organisation which operates and has ownership of assets in more than one country. Most TNCs operate in just a few countries, are involved in manufacturing and services and have their head offices in more developed countries. TNCs are responsible for employing over 40 million people worldwide, indirectly influence an even greater number, and to control over 75 per cent of world trade. At first, many branches of TNCs were located in economically less developed countries, but there has been an increasing global shift to the affluent markets of Europe, North America and Japan. The reason why TNCs originally decided to locate in less developed countries was due to the existence of valuable resources, but the most important reason was the level of incentives offered by the home government. If a TNC decides to settle in an LEDC, there will be huge benefits. Many new jobs will be created, which will be filled by local labour. ...read more.

This could also help to improve output further because workers will be in a better environment and mood to work. Money can also be used for environmental control, which could include developing ways of minimizing the amount of pollution certain industries create and even developing new production methods. Although the advantages to the country are numerous, there is a negative side which includes many disadvantages. Although the new TNC will supply many jobs, the cost of investment will be high. The new TNC will know that wages in the target country are very poor and so they will not have to pay workers as nearly as much as they pay employees in MEDCs. This is quite unfair, because the TNC is taking advantage of the people in the LEDC. Furthermore, employees will be made to work very long hours with little or no breaks. The TNC will most likely choose not to employ local highly skilled workers, because they will expect higher salaries and better working conditions. This will mean that low skilled people will be given jobs, but higher skilled workers will remain unemployed. ...read more.

The problem is that the TNC would not benefit as much from these improvements so it does not concern them. The development of new firms can damage the environment because land must cleared for factories to be built. This could destroy the natural homes of species of animals, which is very difficult to correct. Because the target country will not be aware of the amount of pollution produced by industry, the laws on pollution control will not be as tight as the country where the firm is located. This could cause health problems, especially if a lot of waste is produced and dumped into the local water supply, for example. It is clear that there are many advantages and disadvantages in terms of TNCs creating branches in other countries. The real problem is that the disadvantages mostly affect the target country, not the TNC. So until LEDCs are aware of the problems caused by firms settling in their country, the chance of the growth of TNCs slowing down is very small. This could cause the gap between the levels of development in LEDCs and MEDCs to become even wider in the future. ...read more.