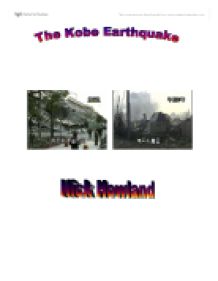 Nick Howland The Kobe Earthquake [image005.jpg] [image006.jpg] The Kobe Earthquake Japan is situated where four of the Earth's plates meet - the Eurasian and North American Plates to the north, and the Philippine and the Pacific Plates to the south. Therefore it is not surprising that the islands have many volcanoes and suffer 1,000 earthquakes every year. Most of the quakes are quite mild, but in 1995, to the very south of the island, about 440 km from Tokyo, there was a massive quake. The industrial port of Kobe suffered the worst damage with collapsing buildings and ruptured gas mains bursting into flames all over the city. Many of the city's newer buildings survived, however, because they had been built with quakes in mind. Plate Tectonics The Kobe earthquake disaster occurred because of the effects of plate tectonics. Plate tectonics are a theory of geology which looks at the earth and the underlying continental drift. This theory suggests that the earth's outermost surface is made up of two sub layers, the rigid litosphere and the semi-molten asthenosphere. Tectonic plates are roughly divided into two types: continental and oceanic plates. How they are divided is by the thickness of the plates; oceanic plates are thinner than continental plates, this is why the oceanic plates generally lie below sea level, while the continental plate's project above sea level. ...read more.

Column shearing revealed small reinforcing steel ties at relatively large spacing. Failed welds at splices of longitudinal bars were also observed. [image016.jpg] Utilities and Services Like most cities, services like water, gas, electricity and sewerage were provided through a network of underground pipes and cables. When the ground began to move, the more rigid pipes weren't able to move as well so they fractured. Almost three quarters of the water supply across the entire city was out of action, gas pipes leaked gas into the air, and sewers discharged their contents into the streets. Electricity supplies were not all routed underground but that didn't save the supply from disruption. Much of the supply was transmitted around the city by 123cables on poles. As buildings collapsed and the ground shook, many of the poles also collapsed, cutting off the electricity supply not just to homes, but to police stations, hospitals and fire stations too. During the earthquake, Kobe's water system sustained approximately 2,000 breaks. Generally, ground or building failure was the cause of the severe damage to Kobe's water systems. The resulting lack of water contributed significantly to the fire problem and was a major hardship on the population for several months. ...read more.

The economic loss from the 1995 earthquake may be the largest ever caused by a natural disaster in modern times. The direct damage caused by the shaking is estimated at over �13 trillion (about U.S.$147 billion). This does not include indirect economic effects from loss of life, business interruption, and loss of production Social Effects The most significant social impact was the massive loss of life. In addition more than 300,000 people's houses had been severely damaged or destroyed in the earthquake, leaving many homeless with a hardship of space for temporal shelters. The water pipes had been destroyed and ruptured along with the shortage of many other essentials including food, and warmth. In response to this food was rationed and sheets and blankets were assigned to families. Conclusion Our experience with many past earthquakes in developed, industrial areas is that the media, particularly television, can present an exaggerated image of the damage by concentrating on the few spectacular collapses that occurred. The actual damage in Kobe and the surrounding region, however, was much worse than the media could convey, because it is very difficult to show more than local damage at one time. For example, images of the main 550-meter-long collapsed section of Kobe's elevated Hanshin Expressway were ever-present throughout the media, but that collapse was only a small fraction of the losses to the area's highway system. [image027.gif] ...read more.