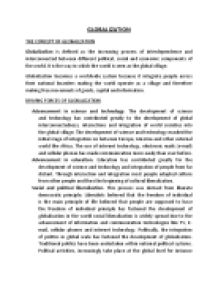 The Meaning of Globalisation and its Effects

﻿GLOBALIZATION THE CONCEPT OF GLOBALIZATION Globalization is defined as the increasing process of interdependence and interconnected between different political, social and economic components of the world. It is the way in which the world is seen as the global village. Globalization becomes a worldwide system because it integrate people across their national boarders making the world operate as a village and therefore making free movements of goods, capital and information. DRIVING FORCES OF GLOBALIZATION Advancement in science and technology. The development of science and technology has contributed greatly to the development of global interconnectedness, interactions and integration of world societies into the global village. The development of science and technology masked the initial stage of integration on between Europe, America and other external world like Africa. The use of internet technology, electronic mails (e-mail) and cellular phones has made communication more easily than ever before. Advancement in education. Education has contributed greatly for the development of science and technology and integration of people from far distant. Through interaction and integration most people adopted culture from other people and thus the beginning of cultural liberalization. Social and political liberalization. This process was derived from liberate democratic principle. Liberalists believed that the freedom of individual is the main principle of life believed that people are supposed to have the freedom of individual principle has fastened the development of globalization in the world social liberalization is widely spread due to the advancement of information and communication technologies like TV, E-mail, cellular phones and internet technology. ...read more.

TRADE LIBERALIZATION Trade liberalization refers to the reduction of tariffs and trade barriers to more foreign competition and foreign investment in the economy. It is a term which describes complete or partial elimination and reduction of trade barriers such as quota as tariffs. Trade liberalization sometimes refers to free trade. DEMOCRATIZATION PROCESS Globalization is associated with global political reforms under the process called democratization. The democratization process is looking at the following basic principles; Free and fair political competition. There is peaceful, free and fair competition between different political parties for there ought to be following requirements. Firstly, permanent party organization at the local and national levels. No opposition party can exist without continuous and permanent struggle against the ruling party. Secondly, there ought to be a determination of the past leaders to hold political party. Thirdly, there ought to be continuous contact between all levels of a given political party. Fourthly, there should be a determination of the past to gain popular acceptance for its programs. Fifthly, there must be contact search for more members such as requirement can exist only in a multiparty system. Therefore, a monopoly system not be democratic. It is a rejection of democracy and leads dictatorship. Tolerance. This is the ability to bear with something unpleasant or annoying. Tanzania is composed of different races, tribes and religious group this society African from the majority compared with the negligible non-African minority group. ...read more.

Globalization has made it necessary for poor countries like Tanzania to form strong political organization as a way of minimizing negative impacts of globalization. Formation of Africa Union (AU) and the formation of East Africa federation are consequences of globalization. Globalization has speeded up the democratization process in Tanzania. In order to promote democracy, Tanzania is adopting global democratic principles such as value of laws, transparency, militarism, accountability and is trying to implement those aspects. NEGATIVE EFFECTS There have been centralization of political power in biggest capitalist powers. The above situation have created interstate order, hence reducing political sovereign to poor countries like Tanzania in such a way that they are more accountable to bigger countries like USA, UK then to their citizens. Tanzania has been affected by global political disorders and terrorism bombings USA embassy in Dar es Salaam in a product of global political conflicts without involving USA and Al-Quarda terrorists where against USA imperialism. Globalization is pushing down effort by poor country like Somalia. To strong political organizations such as Africa Union and East Africa Community due to spread of interests to the regions by bigger power for America and Western Europe. Countries like Tanzania become more interesting to corporate with one of the capitalist countries rather than her neighbouring countries like Malawi, Mozambique, Zambia etc wishing to get more profits. In some cases with its related political propaganda such as multipartism, transparency, accountability, need of law and others create chaos them. There are some politicians who manipulate the above agenda. ...read more.