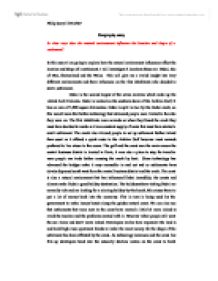 In what ways does the natural environment influence the location and shape of a settlement?

In this essay I am going to explore how the natural environment influences affect the location and shape of a settlement. I will investigate 4 locations these are: Dubai, Isle of Man, Switzerland and the Wales.  This will give me a varied insight into very different environments and there influences on the first inhabitants who decided to start a settlement.

Dubai is the second largest of the seven emirates which make up the United Arab Emirates. Dubai is located on the southern shore of the Arabian Gulf, It has an area of 3,900 square kilometres. Dubai is split in two by the Dubai creek, so this would mean that before technology had advanced people were limited to the side they were on. The first inhabitants were nomads so when they found the creek they must have decided to reside as it was constant supply of water this must have started a small settlement. The creek also allowed people to set up settlement further inland than usual as it offered a quick route to the Arabian Gulf however most nomads preferred to live closer to the ocean. The gulf and the coast was the main reason the central business district is located in Deria, it was also a place to stop for traveller were people can trade before crossing the creek by boat.  Since technology has advanced the bridges make it easy accessible in and out and so settlements have slowly dispersed south west from the central business district and the creek. The coast is also a natural environment that has influenced Dubai incredibly, the coasts and climate make Dubai a good holiday destination. The holidaymakers visiting Dubai are normally rich and are looking for a relaxing holiday by the beach, this causes them to put a lot of money back into the economy. This in turn is being used by the government to make luxury hotels along the golden natural coast. We can also see that settlements that were next to the coast have moved a little bit more inland to avoid the tourism and the problems created with it. However richer people still want the sea views and don’t move inland. Developers realize how expensive the land is and build high rises apartment blocks to make the most money. So the shape of the settlement has been affected by the coast. As technology increases and the coast line fills up developers head into the naturally shallow waters on the coast to build artificial islands for properties and so affecting the location of some of the settlement. The availability of the gulf has allowed import and export to flourish so we can see a lot of houses and apartments around the docks for jobs and traders. The wide expanse of sand has allowed the developers to increase the size of the settlement to the south west and the south east.

The Isle of Man lies in the Irish Sea, between England, Scotland, Ireland and Wales. It is 33 miles long, 13 miles wide and covers an area of 227 square miles. There are Hills in the north and south are that are bisected by a central valley. The north is exceptionally flat, consisting mainly of deposits built up by deposition from glacial advances from Western Scotland during colder times. The Isle of Man has only one mountain higher than two thousand feet, Snaefell, with a height of 621 meters this is located in the center of the island. This mountain has created dead land as there are very few settlements on the high land because it is too steep. However there are five settlements around the mountain which all except one are also on the cost line. The valley that bisects the hills also gives some land in which a settlement has developed this is called Sulby. There is very flat land in the north of the island so there are lots of settlements because the natural orientation of the land has made it incredibly easy to build here. The island is relatively flat down the south side of the island, this is where the capital is located these reason for this is because this has the shortest route to Liverpool and Blackpool these are both areas in which lots of export and import takes place and will also allow the island to be connect by ferry to the main land in a short amount of time. However the coasts play the largest part in affecting the shape and location of the settlements the reason for this is that most of the main towns are located on the coast. The coast provides water and food for the first settlers however in now provides beautiful houses and beaches for the modern day settler. The beaches and the remoteness of the small island has made it popular for older people so the houses are more suited to the older population, for example cottages and not apartment blocks this has affected the shape of the settlements as there needs to be a bigger space in order to make a large settlement. The weather is slightly warmer down to the south of the island so we can also see that this has affected the amount of settlers in the area .In some areas like Ballaugh the un-hilly land has allowed more farming to take place so that the settlements are incredibly spread out.

Switzerland is a small, landlocked country set amid mountainous terrain in the European continent. It is bordered on the west by France, on the north by Germany, on the east by Austria, and on the south by Italy. The mountains make it a extremely popular tourist attraction for skiers and snowboarders in the winter and hikers and mountain bikers in the summer. The natural environment has affect the shape and location of the settlement in many ways. The mountain creates streams of melted ice so the first settlers may have started to build a settlement on the mountain for fresh water. the mountain has created a massive tourist attraction and so settlements near the mountain make use of the expensive land by building high and having lots of apartments to let for holiday. The popularity of the mountain has made most native Swiss people to move further away from the ski lifts as it is too overrun with tourist and commerce and the land is too expensive to buy. So they move to places around the Central business district which is Zurich. Many businesses will have located to the mountains as they have seen the potential tourist money, this will create jobs and therefore more population for the mountainous area. However the norm for these workers is too live about 30 minuets from the moutons resorts and hich-hike to work. So we can see that the mountain has also made the settlements outside the resorts grow. Another way that the natural environment has affected the size of the settlements is the boarders, Switzerland is one of the most diverse countries in the world. The good standard of living persuade people form Italy, Austria, France and Germany to move into the big cities like Bern and Zurich to find work and to enjoy the relaxed way of life then as they grew older they moved back to the towns near the original boarder, so we can see that the population will have shifted from the cities to the outskirts were they originated from. There are also a lot of lakes in Switzerland (eleven in totals) each lake has two or more settlement in the vicinity this may suggest why the first settlers decided to create a settlement near a reliable water supply.

Wales is located in the south-west of Great Britain and is bordered by England to the east.  The areas in Mid Wales, the south west and west are predominantly rural and characterized by hilly and mountainous terrain. The fertile soil that is available is a large factor in the distribution of settlements. The fertile soil may also be a reason why the first settlers chose Wales.   Farms need lots of room so you tend to get spread out settlements in a rural area, this is present in Wales. The center inland is mostly farms and farming villages so it is sparser populated than the coasts where the bigger more popular town are locates. The coasts may have started as little fishing villages as that is the natural resource that is available but eventually the sea side views and the quiet life attracted an aging population. The climate also makes it a more desirable place for farms. There is lots of rainfall and the sunlight hour’s favorers some crops. Wales is very hilly and all the mid section is mostly used for farming and agriculture because it is too hilly to create large settlements like Cardiff near the coast. Cardiff flatter location near the coast allowed it to become the central business district which in turn allowed in to progress in academics and thus lots of students move to Cardiff for the university and the technology. However in most cases when they finish their degree they will move away from Wales to get a better job.

I can see that the natural environment influence the location and shape of a settlement a lot and the most influential are; the sea, gradient of the land and the quality of the soil as these all lead on to tourism or commerce.  However there are other factors like the climate that need to be considered.