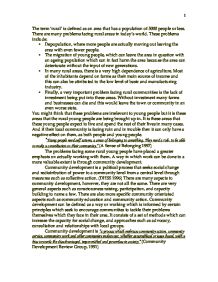 There are many problems facing rural areas in today's world.

The term 'rural' is defined as an area that has a population of 5000 people or less. There are many problems facing rural areas in today's world. These problems include: * Depopulation, where more people are actually moving out leaving the area with even fewer people. * The migration of young people, which can leave the area in question with an ageing population which can in fact harm the area because the area can deteriorate without the input of new generations. * In many rural areas, there is a very high dependence of agriculture. Most of the inhabitants depend on farms as their main source of income and this can also be attributed to the low level of basic and manufacturing industry. * Finally, a very important problem facing rural communities is the lack of investment being put into these areas. Without investment many farms and businesses can die and this would leave the town or community in an even worse state. You might think that these problems are irrelevant to young people but it is these areas that the rural young people are being brought up in. It is these areas that these young people expect to live and spend the rest of their lives in many cases. And if their local community is facing ruin and in trouble then it can only have a negative effect on them, as both people and young people. ...read more.

And if these needs aren't met then the effects are only going to be negative. The term young people is very general. The lack of power that young people have or don't have can be further increased. This is through divisions in the young people themselves. There are many issues that can determine the participation by a young person. These issues include gender, disabilities and religion. These issues can emphasise the powerlessness of the young people in a rural community. An example of this can be a community which has a greater population of females, however, a greater percentage of the power goes to the males in the community. This is not healthy. It can only make the community go backwards. It can have an adverse effect on both parties. The females because they are not being listened to and they are powerless in their community. But it can also affect the males because they might feel that they are under too much pressure and that they are given more power because of their masculinity. They may therefore refrain from participating in other activities in order to protect their identity and status within that community. From the research shown in (A Sense of Belonging 1997), it is clear to see that there are many main stakeholders in the local communities. These include: * The Church * The adults * The police * The paramilitaries These four stakeholders bring forward many positive and negative aspects towards the local communities in rural areas. ...read more.

Because the rural towns are so close-knit, any paramilitary activity by a member would be recognised and found out. A key stakeholder which has a different type of influence on the young people in rural communities is Youth Action Northern Ireland. Youth Action NI recognise the achievements of the young people by presenting them with 'Youth Achievement Awards'. These awards were developed to recognise and accredit young people's achievements through their normal participation in youth work. The awards scheme actively engages the young people's decision making and it succeeds in giving them ownership in their personal development. Youth Action NI focus on working with urban and rural young people between the ages of 10 and 25, particularly targeting the older age range of 14 to 25. They work in partnership with transnational organisations to share practice and provide international opportunities for the young people. During the last fifteen to twenty years there has been a significant growth in the number of community development groups in rural areas. In 1990 a Rural Development Group was drawn up with the Department of Agriculture. A Rural Development Division was then established to 'actively promote development by providing a coordinated integrated statutory financial response to projects generated at a community level." (A Sense of Belonging 1997) This integrated programme created a Rural Development Council (RDC). The Rural Development Council attempted a holistic approach to rural regeneration. The youth service policy is largely based on the concept of vertical development. It focuses on the developmental needs of a client group and developing practice based around personal and social development. 1 ...read more.