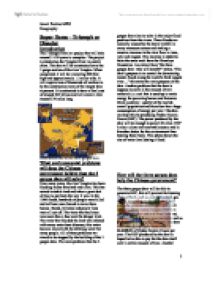 Super Dams - Triumph or Disaster Introduction The 3 Gorges Dam is a project that will take around 15-20 years to complete. The project is situated on the Yangtze River in central china. The dam will be constructed over the 3 gorge section of the river Yangtze. When completed, it will be a towering 600 feet high and approximately 1.2 miles wide. It will require tens of thousands of workers to be the construction team of the largest dam at present. It is estimated to have a final cost of around �45 billion and will create a lake around 370 miles long. This diagram shows the location of the construction site of the three gorges dam. What environmental problems will does the Chinese government believe that the 3 gorges dam will solve? Over many years, the river Yangtze has been flooding across farmland and cities. This has ruined valuable land and takes a great deal of time to put back the way it was. In the 1996 floods, hundreds of people were killed and millions were forced to leave there homes. Roads, railways and power lines were all cut off. The water that had risen was more than a foot over the danger level. ...read more.

The World resource institute are in favour of the 3 gorges dam because it will generate HEP which will prevent the country from burning fossil fuels and will make china a cleaner country. This will aid stopping global warming in the future. It also helps to preserve the Earth's natural resources such as coal and oil because they are non-renewable sources. The workers on the construction site of the dam are in favour because it means that they have employment for up to 20 years. Some points that have been made by the senior engineer of the project show advantage towards the project. For example, navigation on the river Yangtze will be greatly improved by the 3 gorges dam and there will also be picturesque views from the boats for cruises and other travel boats. Also endangered animals such as the white alligator and the Chinese river dolphin will be protected by reserves in the local area. There are other points also such as the advantage of the reservoir that will be created due to the dam being built. The huge lake can be used for fishing and recreation; this can also create opportunities for employment. ...read more.

After viewing all of my information, I have come to a conclusion about my views on the three gorges dam projects. Personally I believe that the dam should not be built. I believe this because I think that they should build a scheme that will not affect people in such a dramatic way. For example, they could get better flood control without having to stop the rivers natural flow by protecting the cities and farmland more. That will preserve the land and will also stop damage being caused. I also think this because it will be a waste of both money and time to build the dam because the silt build up will increase by a massive amount and this will block and then break the huge dam. Another reason is that the economy of china will fail because firstly it will need to loan money off other counties to pay for the construction of the dam, they will need to pay that money back and without as much tourism and farming, they may not be able to pay for they dam as soon as they had hoped. I do agree with the fact that HEP will defiantly help the environment and that it is needed to help prevent the burning of fossil fuels but I think that they can incorporate HEP into the country without the 3 gorges dam. ...read more.