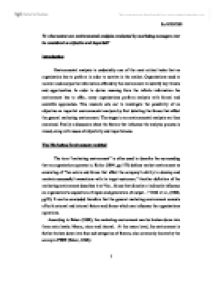 To what extent can environmental analysis conducted by marketing managers ever be considered as objective and impartial?

The last stage of Daft and Weick's model is learning. It refers to the strategic responses or actions that organisations make based on the interpretations (Choo, 1998). For example, if a firm perceives a new labour policy set by the government as a potential threat to its operations, it might respond by changing the firm's employee hiring practices. Conversely, if a firm identifies a perceived opportunity of a gap in its market, it may attempt to fill it by producing new products or services. Objective and impartial environmental analyses : An illusion? Many organisations today have formal and organised environmental analysis procedures and systems (Diffenbach, 1983; Klein and Linneman, 1984; Subramanian et al., 1993a). Formalised scientific techniques such as Delphi projections, cross-impact analysis, morphological analysis and exponential forecasting (Diffenbach, 1983) suggest that the analyses could be objective and impartial. It must not be forgotten however, that these techniques and systems were designed by organisations, which are human institutions, and that the analyses are mostly conducted by the employees of these organisations. Human behaviour is ruled by cognition, which is the process and ability to get knowledge (de Wit and Meyer, 1999). Knowledge is then stored in cognitive maps, also referred to as cognitive schemata (Lenz and Lyles, 1985). According to de Wit and Meyer (1999) ...read more.

Johnson and Scholes (1999, pp 77). This has implications on the interpretation ability of managers in environmental analysis. Dutton (1993) states that "Where performance record is strong...decision makers are likely to feel more confident in their views of the causes and solutions for issues, and consequently, to rely heavily on past issue interpretations." Dutton (1993, pp 349). While managers' cognitive behaviour are apparent in all aspects of environmental analyses, that does not necessarily mean they should be reduced. Choo (1998) notes that it is precisely because of the many years of experience and learning that managers can develop intuition; and hone their unique skills in "making sense of ambiguous developments, detecting weak signals of change, catching the significance of subtly nuanced messages, drawing connections between disparate events" Choo (1998, pp 134). It would seem that to be truly effective, environmental analysis needs the marriage of formal, scientific techniques and procedures with the intangible forces of experience and intuition. Conclusion This essay has shown how organisational and individual level factors can influence the analysis process. From the assessment and evaluation done throughout this essay, it can be concluded that environmental analysis can never be considered objective or impartial. Although formalised techniques have been developed, environmental analysis cannot function without the "human" element of cognitive interpretation which is impossible to define in absolute terms. It seems therefore that environmental analysis would remain much more of an art than a science. ...read more.