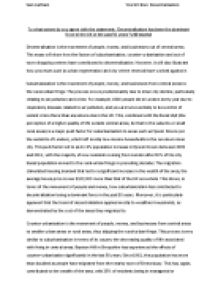 To what extent do you agree with the statement: Decentralisation has been the dominant force in the UK in the past 50 years? (40 marks)

﻿Sam Larlham World Cities: Decentralisation To what extent do you agree with the statement: ?Decentralisation has been the dominant force in the UK in the past 50 years?? (40 marks) Decentralisation is the movement of people, money, and businesses out of central areas. This essay will show how the factors of suburbanisation, counter-urbanisation and out of town shopping centres have contributed to decentralisation. However, it will also illustrate how processes such as urban regeneration and city centre renewal have worked against it. Suburbanisation is the movement of people, money, and businesses from central areas to the rural-urban fringe. The process occurs predominantly due to inner-city decline, particularly relating to air pollution and crime. For example, 4300 people die in London every year due to respiratory diseases related to air pollution, and you are twice as likely to be a victim of violent crime there than anywhere else in the UK. This, combined with the Rural Idyll (the perception of a higher quality of life outside central areas; be that in the suburbs or small rural areas) is a major push factor for suburbanisation to areas such as Epsom Downs (on the outskirts of London), which left mostly low-income households in the run down inner city. This push factor led to an 11.9% population increase in Epsom Downs between 2009 and 2011, with the majority of new residents coming from London after 30% of the city based population moved to the rural-urban fringe in preceding decades. ...read more.

These centres are able to exploit economies of scale in order to lower costs and increase output. The lower prices and flagship stores that have resulted from this encouraged 29.4 million people to visit the Trafford Centre in 2005. This could also be attributed to the increased availability of leisure facilities at shopping centres, such as the Bowling Alley and Cinema that feature at the Trafford Centre. Equally, improving transport links and increased car ownership (there are now 30 million more cars on the road than there were in 1950) have helped increase footfall at these out-of-town retail outlets. The Trafford Centre has particularly benefited from nearby links with roads such as the M60, as well as 11,000 spaces of free parking (something not available in the city centre). Of course, the negative impacts of this nature of retail demand are mostly felt by competitors in central areas. The changing patterns of consumers? shopping have caused five areas of Greater Manchester to have shop vacancy rates of over 25%, compared to the national average of 14.3%. This means that the profit generated in this area stagnates significantly, as small local businesses cannot compete with the low average costs offered at larger outlets elsewhere. These impacts further strengthen the argument for decentralisation being dominant, as the concentration of money and businesses diverges away from central areas. ...read more.

A result of this was a halving of the unemployment rate, and an inward migration of ?white collar? (highly skilled, service industry) workers. There were also efforts to achieve environmental sustainability, with over 200,000 trees being planted. This would have reduced air pollution, as well as making the area more aesthetically appealing, potentially attracting greater investment and migration, which would have produced a greater economic return. Whilst the corporate driven nature of the LDDC did not necessarily benefit local low-skilled, ?blue collar? workers, it created a movement of people, money and businesses back into London, thus meeting its aim of reversing decentralisation. This suggests that, in more recent years, decentralisation has not been a dominant force in the UK. Based on the evidence shown, it appears that the statement is definitely true to the extent of those on middle and high incomes. Although, given that the UK is a developed country, meaning these people make up the majority of the country?s population and national income, it could be argued that decentralisation has been a dominant force in the UK as a whole for the last 50 years. However, after the success of initiatives such as the new Bullring and the LDDC, it looks as if re-urbanisation could be the dominant force in the next 50 years, as more central areas adopt similar ideas and encourage the return of people, money, and businesses. Word Count: 1,364 ...read more.