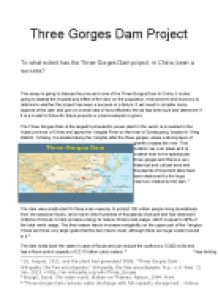 To what extent has the Three Gorges d*m project, in China, been a success?

﻿Three Gorges d*m Project To what extent has the Three Gorges d*m project, in China, been a success? This essay is going to discuss the pros and cons of the Three Gorges d*m in China; it is also going to assess the impacts and effect of the d*m on the population, environment and economy to determine whether the project has been a success or a failure. It will need to consider many aspects of the d*m and give an overall idea of how efficiently the da has been built and determine if it is a model to follow for future projects or a bad example to ignore. The Three Gorges d*m is the largest hydroelectric power plant in the world, is is located in the Hubei province of China and spans the Yangtze River by the town of Sandouping, located in Yiling District, Yichang. It is located along the Yangtze after the three gorges, where a strong layer of granite crosses the river. This location wa s an issue as it is located near to the spectacular three gorges and this is a very historical and cultural area and thousands of important sites have been destroyed by the huge ...read more.

The maximum energy produced by the d*m is equal to 18,200Mw, and it gives out 84.6 billion kilowatt hours of clean energy annually, around 3% of China?s power demand. [4]This is well under the previous objective to provide 10% of China?s need for power, a goal that has been failed because of the raise of power need in China. The power station can only produce the maximum energy capacity when the reservoir is filled up to 175m, but the sheer weight of the water has been causing landslides and seismic activities and can block the port of Chongqin when the water gets too high. Ultimately the d*m now lets 10000 tonnes ships reach Chongqin instead of the 1500 tonnes ships that could before the d*m. This has gretly increased the economy of the area as the freight capacity was about 18.0 million tonnes per year. The freight capacity of the river increased six times and the cost of shipping was reduced by 25%. The total capacity of the ship locks is expected to reach 100 million tonnes per year. The Chinese government decided and approved to build the d*m in 1992 and it finished building in 2006, while the last part, the ship-lift is expected to be completed by 2014. ...read more.

The designers in the beginning have overlooked most of these problems but now they will have to find solutions to them. Ultimately I think that the Chinese government has met the goals and the three gorges d*m reflects this greatly resulting in the largest hydroelectric power plant in the world. The d*m can now let much bigger ships reach the upper part of the Yangtze and help the economy of China grow. The goals were actually very challenging to meet and the work that has been done on the d*m have proved that people can build large and futuristic projects to meet all the demands of the modern society. In the case of the Three Gorges d*m I think that the result has not been neither a success nor a failure, as it appears to me that the problems have been overlooked and the solutions are yet to be found. Overall the large energy production and the increase in the areas economy have helped China a great lot and this makes me think that I think that if the large problems that the builders have to face are solved the d*m can turn out to have been one of the greatest projects of mankind, and even one of the most successful. ...read more.