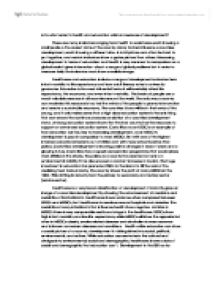 To what extent is health and education valid as measures of development?

A To what extent is health and education valid as measures of development?

There are many indicators ranging from health to social care each showing a small puzzle o the current state of the country. Many factors influence a countries development, each showing a different side. A total picture can often be hard to put together, and certain indicators show a grater picture than others. Measuring development in terms of education and health is very common for comparison on a global scale it gives information about a range of global problems but in order to measure fairly the indicators must show a realistic image.

Healthcare and education include a range of development indicators from infant mortality to life expectancy and from adult literacy rates to university graduates. Education is the most influential factor it will inevitably affect life expectancy, the economy, and even infant mortality. The brains of people are a much valuable resource in all countries around the world. The only way a country can maximise this resource is too fuel the minds of the people to promote innovation and create a sustainable economy. The countries future will be in the hands of the young, and it only makes sense that a high class education system is the only thing that can ensure the continuous success or solution of a countries development status. A strong education system shows that the host country has the resources to support an advanced education system. Costa Rica as an LEDC is an example of how education can be, key to increasing development, as an LEDC its development is poor in comparison to most MEDCs. But with one of the highest invested educational systems out of LEDCs and with more school teaches than police, Costa Rica development is showing positive changes in recent years and a glowing future. Costa Rica has a superb conservation programme that would place most MEDCs in the shade, the policy as a country has created not only an environmental stability it has also ensured a constant increase in tourism. The huge investment in education has promoted TNCs to the island to fill the void of the declining food trade industry. The country shows the path of many MEDCs in the 1800-1900, shifting its industry from the primary to secondary and tertiary sector (service sector).

Healthcare is a very broad classification of development; it instantly gives an image of a countries development by showing the advancement of medicine and social life of its inhabitants. Healthcare shows variance when compared between LEDCs and MEDCs, but healthcare far revolves around hospitals and midwifes. The social life of many inhabitants that influence health show negative statistics in MEDCs there is very comparable results and stage in the healthcare. LEDCs show high infant mortality and low life expectancy while MEDCs will show the opposite but often in MEDCs obesity, smoke related diseases and alcoholism is more common and is known as modern diseases and conditions.  Health unlike education can show a social picture of a country, development is distinguished into social, political, environmental, and culture. While education concentrates in the cultural and divulges into environmental, social and demographic, healthcare shows a side of social and demographic that education can’t. Development in the UK has far progressed that of any LEDC counterpart. The healthcare system is renounced around the world, as it offers ‘free healthcare’ for the masses. In order to successful deploy a system that can support a huge population shows huge development economically. Healthcare is easily intertwined with life expectancy and infant mortality, as expected the UK has a high average life expectancy of 78 and a small infant mortality rate. But the social life of the UK population shows how even though infectious diseases are smaller in numbers than LEDC counterparts, mental, and self harm diseases and disorders are much more common (obesity, smoking, alcohol). Healthcare is a good indicator of development as though many assume shows economic development, it also shows a more in-depth picture of development in terms of social lifestyle.

Essentially education and healthcare revolve around money (GNP) but they both show a social side that money can have little influence. Education and healthcare is fundamental for any country and its future development but is no means the only reason for stunned growth. Environmental problems, debt and political unrest can further influence development especially in LEDCs. There is always going to be problems in acquiring reliable records and are always vulnerable to being altered, in order to display a false picture normally associated with egotistic world leaders. Many MEDCs can shine their figures on healthcare and education but though they show a big part of the picture they in no way show the whole picture. Any country that wishes to develop and lead a better life for its inhabitants firstly must enhance the minds of the people and create healthcare that can sustain them. All countries revolve around its population and its population must be the answer.