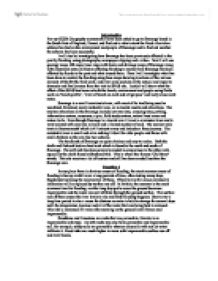 To what extent the flood alleviation scheme has had on the environment and people of Swanage and to find out weather the scheme has been successful.

Introduction For my GCSE Geography coursework I have been asked to go to Swanage based in the South East of England, Dorset, and find out to what extent the flood alleviation scheme has had on the environment and people of Swanage and to find out weather the scheme has been successful. I will also be investigating how Swanage has been previously affected in the past by flooding, using photographs, newspaper clipping and a video. Next I will use geology maps, OS maps, base maps with basin and drainage maps of Swanage along with classroom notes on factors effecting flooding to answer how Swanage has been affected by floods in the past and what caused them. Then I will investigate what has been done to control the flooding using base maps showing locations of the various element of the SFAS, field work, and river cross sections at the natural and improve channels and finally notes from the visit to SFAS site. Lastly I will show what the effect of the SFAS has been on both the beach; environment and people using fields work on 'beach profile', 'level of beach on each side of groynes' and lastly class work notes. Swanage is a small town tourist area, with most of its land being used as woodland, farmland, small residential area, or as tourist resorts and attractions. The tourism attractions in the Swanage include caravan sites, camping sites, parking, information centres, museums, a pier, field study centres, natural trust areas and nature trails. Even though Swanage is a tourist area it is not a commuter town and is very isolated with only one railway and a limited number of road. The nearest main town is Bournemouth which is 45 minuets away and includes a ferry journey. The residential area is small and calm making it ideal for older people and those with small children as the area has two schools. ...read more.

Higher velocity takes the water directly out to Swanbrook bay via Banjo pier. Flood water storage areas In case of a flooding it stores water stopping a strain on the river. When flooding accurse the 2 storage areas store water from Swanbrook and tributary streams west of Prospect farm. Dams were constructed and spillways in case the areas themselves were flooded. Soil from the storage areas was used planting and landscaping. King George's field is overflow storage area. The field, coach and car park and fields to the north and west are low lying and can hold a lot of water. Bridge at Prospect farm To allow cars people, etcetera to travel across, took away middle support. Middle support traps material, i.e. trees get caught up and causes flooding, so the middle support was removed to prevent clogging and to allow a great flow of water to pass through. Banjo Pier To take water out to sea from the relief culvert and to prevent flooding the beach front. A culvert has been constructed to redirect water safely and more efficiently than the natural channel. The Swanbroook is to cut off and redirect by a control sluice to the relief culvert, which then carries the water directly to Swanage bay. This is only works when water in Swanbrook rises above normal levels. 95% of the time it is empty apart from the tides. The route along Victoria Avenue is the easiest and most direct route. A pier gas been built over the outfall pipe that takes the water out to sea to prevent it flooding the beach front. The pipes are on the side of the pier to prevent sea water washing straight back up it. Rock Armouring This is the Purbeck stone put on the improved channel. It allows the river to flow faster by reducing the friction preventing erosion. The water can pass more quickly because the channel is smoother. ...read more.

There is evidence that the sea wall of Swanage has been severely damaged and will eventually crumbling in big blocks in which case the money spent of the Flood Alleviation would have been a waste. Other negative points about the sites are that they sometimes contain litter and have bad smells surrounding them because of back swash from the sea. Most locals feel safer but not entirely safe shown in the questionnaire asked. The Swanage flood alleviation scheme seems very successful although there has been no major storm since its construction so it has yet to be put to the test. However a lot of the Swanage people seem to feel safer than they did before, which suggest it was millions well spent. The scheme is working but the danger of the sea wall collapsing makes me question what other type of evaluation reports people took on the area before they put the Flood scheme into practise. I would like to see how the scheme would work during a major flood and if it could handle it. Generally the effects of the scheme on the public and environment have been good. There are obviously slight faults in such things as landscape and one farm owner had to sell his land in order for the scheme to take place, but generally there are no longer floods in Swanage, which would cause more damage to the environment than the new physical aspects. The people therefore are now safer and more comfortable as demonstrated in my pie chart. The economy no longer feels threatened on the basis that they might go out of business because no body can reach there shops during a flood, services are no longer on red alert during storms and are no longer stretched to perform for the public. Finally the environment is no longer damaged by becoming water logged and deprived and the areas of flood relief are so well hidden hat people do not even realise they are there. So yes if feel the scheme was a success. ...read more.