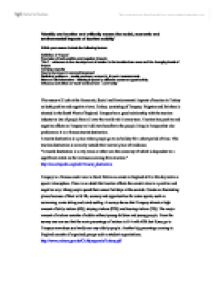 'Identify one location and critically assess the social, economic and environmental impacts of tourism activity' Within your answer include the following factors: Definition of 'Impact' Examples of both positive and negative impacts TALC - reference to the development of tourism in the location/case area and the changing levels of impact Carrying capacity How is the impact measured/assessed Statistical evidence - tourist numbers, economic, impact measurements Mass or Elite/alternative - differing impacts by different customer types/activity Influence and effect on 'local' environment - community This essay will look at the Economic, Social and Environmental impacts of tourism in Torbay on both positive and negative views. Torbay, consisting of Torquay, Paignton and Brixham is situated in the South West of England. Torquay has a good relationship with the tourism industry as lots of people from all over the world visit it every year. Tourism has positive and negative effects on Torquay as it delivers benefits to the people living in Torquay but also problems as it is a famous tourist destination. A tourist destination is a place where people go to on holiday for a short period of time. This tourism destination is normally outside their normal place of residence. "A tourist destination is a city, town or other area the economy of which is dependent to a significant extent on the revenues accruing from tourism." http://en.wikipedia.org/wiki/Tourist_destination Torquay is a famous costal area in Great Britain as coasts in England still to this day retain a special atmosphere. There is no doubt that tourism affects the coastal sites in a positive and negative way. ...read more.

All these visitors create potential threats for many natural areas around the world. It can put an enormous pressure on the area and lead to negative impacts such as soil erosion, increased pollution, discharges into the sea, natural habitat loss and many more. Tourism often puts a strain on water resources as there sometimes is not enough water for the population in the cities and the tourists. The tourism impact always also depends on the tourism types and activities such as wakeboarding or surfing will influence the sea more. Also young people influence the community and environment in Torquay by going clubbing in the evening. The community sometimes gets scared to go out at the weekends as it is normally really busy and there are a lot of fights. Also litter is a problem at this time of the night as most people are drunk and do not care anymore where they throw their litter. Torquay carrying capacity is quiet high because Torquay is quiet big and has many hotels to offer. There are a few measurements to see if Torquay has gone over their carrying capacity which is normally measured by the noise level and if sea measurements. Most cities have a certain carrying capacity which they will not go over, Torquay on the other hand has no carrying capacity or measurements if there are too many visitors in the town. The more visitors are coming to Torquay the more litter is produced and also tourists do not pay any rates for water, gas or electricity. This means that the water rates within and around Torquay are quiet high and local people suffer from it. ...read more.

After the high point of this stage is reached it will go over to the stagnation stage where tourist numbers fall as the demand levels of the tourists are rising and the environmental impact is getting higher and higher. The fourth and last stage of TALC is the decline stage where tourist numbers are falling and businesses are starting to withdraw and go into different directions. Torquay is at the Stagnation stage at the moment, as it still gets busy in the summer but visitor numbers do not rise anymore. This is due to the increasing demand in new attractions which Torquay can not offer its visitors. All in all tourism has positive and negative effects on Torquay and its community as it brings money into Torquay but also scares the community if the tourism get too much. Without tourism Torquay could not exist. Obviously there are a lot of positive and negative effects of tourism and even if some people in the community are scared of going out tonight, tourism is still good to meet different people and different cultures, which most young people in and around Torquay do, either in the evening or at the beach in the day time. It can happen that there are problems but without them Torquay (Torbay) and its community would not learn from their mistakes and make it better in the next tourism season. The only thing that the government needs to consider know is how to stop the environmental impact on Torquay or how to improve it and make it to their advantage like mentioned earlier, charging guests some extra money to resolve the high water rates for the locals. ...read more.