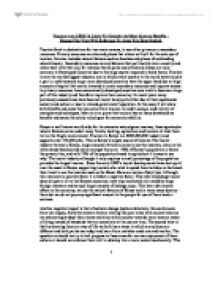 Tourism in an LEDC Is Likely To Generate As Many Costs as Benefits - Discuss This View With Reference To Areas You Have Studied.

Tourism in an LEDC Is Likely To Generate As Many Costs as Benefits - Discuss This View With Reference To Areas You Have Studied. Tourists flock to destinations for two main reasons, to see either primary or secondary resources. Primary resources are sites and places that where not built for the sole use of tourism, this also includes natural features such as beaches and places of outstanding natural beauty. Secondary resources are any features that pull tourists into a country and where built with that aim, for instance theme parks and attractions (these are more common in Developed Countries due to the large capital required to build them). Tourism is now the worlds biggest industry, one in which every country in the world wants to play a part in. unfortunately larger more developed countries have the upper hand due to large amounts of capital that can be invested to create secondary resources and improve access to primary resources. Less economically developed countries now wish to become a large part of this industry and therefore improve there economy. In recent years many previously unused areas have become tourist honey pots either due to there spectacular scenery and culture or due to relaxed government legislation. In this essay I will show both benefits and costs that can come from tourism in Ledc's using a wide variety of examples and techniques. ...read more.

Although prospects look good as tourists are becoming more persuadable and society is swinging into a new wave views that supports ecotourism and is reducing mass tourism. Zimbabwe is another country in with the exact same problems as Kenya, environmental devastation, westernised views forced upon locals, over development, leakage and a rise in crime. Though Zimbabwe has another very different sort of problem, political unrest has been taking place since 1997 on a large scale due to the president of Zimbabwe Mr Mugabe. Under his rule Zimbabwe has become very hostile due to a near civil war that ahs been on and off for the last 20 years. His racists views especially against all white people who own property in Zimbabwe has caused a large withdrawal of investment and industry within Zimbabwe therefore furthering the hostility of the situation. In an attempt to calm the situation the UN has removed various sanctions from Zimbabwe and has removed a large proportion of debts owed to the developed world. This has reassured determined tourists that they will be safe. As such visitor numbers are rising but there are fears that visitor numbers will not return to previous numbers for decades due to bad press around the political situation. One sure fact is that Zimbabwe's once growing economy crashed and is in tatters. ...read more.

In conclusion I feel that less economically developed countries will always have as many costs as benefits when developing though such westernised intensive industries such as tourism. It would be inappropriate to think that the western world would not have a negative effect on the countries and people in question. But it is up to the countries to decide if tourism will work in there favour. If not they can limit tourist input like many Asian countries have for example Korea. As tourist needs change I feel a more positive view on tourism will be taken and more will be done by both tourists and the local people to preserve cultures and environments. This will be aided by the new social need for ecotourism which will aid this steady recovery. The only threats I can see for tourism in less economically developed countries that will be a problem in the futer are low cost flights that are set t entice tourists back to old honey pots such as America and southern Europe. Though my personal view is that with social adaptation and the quest to improve cultural respect from the western world, we will see a great increase in measurements and management used to protect and aid recovery of less economically developed countries and there tourist economy. 1 ...read more.