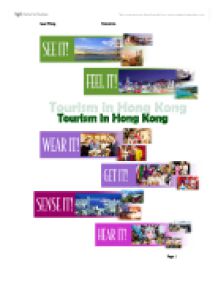 Introduction: TOURISM is one of the major economic pillars of Hong Kong: the most popular city destination in Asia. The Hong Kong government has spent a big sum of money to strengthen the tourism image of Hong Kong. Methodology: In this coursework, I will investigate whether tourism is indeed a major economic pillar of Hong Kong and if Hong Kong needs tourism. I will use many resources such as: books (Hong Kong Year Book), internet (mostly information and data that was published by the Hong Kong Tourism Board, Hong Kong Tourism Commission), questionnaire (conduct a questionnaire in popular tourism districts to gather information from tourists and locals). Introduction to Hong Kong Tourism Board: The Hong Kong Tourism Board (HKTB) is established to promote Hong Kong as a tourist destination. If Hong Kong attracts a lot of tourist, the big spending of the tourists will contribute to the Hong Kong economy. HKTB often uses new strategies to attract tourist to Hong Kong, especially in those sectors that can bring the highest yield in terms of visitor spending. The six main objectives of HKTB are: * To endeavour to increase the contribution of tourism to Hong Kong * To promote Hong Kong globally as a leading international city in Asia and a world class tourist destination * To promote the improvement of facilities for visitors * To support the Government in community promotion on the importance of tourism * To support, as appropriate, the activities of persons providing services for visitors to Hong Kong * Make recommendations to and advise the Chief Executive of the Hong Kong Special Administrative Region in relation to any measures which may be taken to further any of the foregoing matters [HKTB website: http://www.discoverhongkong.com] Introduction to Hong Kong Tourism Commission: Much like the HKTB, it's job is to enhance our tourism facilities, and support the development of new attractions and events, so that Hong Kong remains a premier tourist destination. ...read more.

This is an example of Withdrawal. Not all the income returns to the firm [like the left diagram], some are saved, used to pay taxes and imports. Still looking at the right diagram, the taxes paid by the firms and households are used by the government - Government Spending/Expenditure. This is an example of Injection. Injections are addition income to firms which does not normally arise from the expenditure of households e.g. changes in investment, government spending or exports. Tourist expenditures on goods and services are export spending. As seen in the right diagram, export spending flows back to the firms [injection]. Tourists spending are on goods and services such as hotels, sightseeing, native products, etc. Therefore, if Hong Kong attracts a lot of tourists, causing an increase in export spending, more money will flow to the firms and demand will increase. Firms will then need to increase their output to meet the rising demand. To increase their output, they might employ more people or employ skilled workers, who will evidently request for higher income. This will increase the amount of money to flow back to the households, so they can spend more money. The cycle is restarted. The export [tourist spending] will be used for consuming a good/service, then that good/service's firm will use the money received on other goods and services, and so on, causing the Multiplier Effect on the national income which is many times more than the initial one. Production Possibility Frontier The better the tourism system, which results in more tourists coming, would cause more injection so firms will receive more money. As a result, they would have more money to put in practical uses, so it'll shift the PPT [Production Possibility Frontier] outwards. This means that the firm will be able to produce more. Although it doesn't secure that the firm will use its resources effectively, but the production possibility frontier shows there are limits to production, so by shifting the curve outwards, it means the limit is also moved outwards [so the firm can produce more of the goods/services until it reaches the limit]. ...read more.

Hong Kong is a place which survives on tertiary industries, therefore tourism is vital for the economic development of Hong Kong. With upcoming tourist attractions like Disney Land, Hong Kong will continue advancing towards a real Asia's World City. However, for Hong Kong to continue improving, the government must be careful how it allocates its resources and what to do with them. The government must not [or at least at the minimum] of damaging the environment and must keep a close eye on the health system to prevent any epidemic such as SARS to cause severe damage on the image of Hong Kong. Conclusion To conclude, Hong Kong needs Tourism to survive. Tourism brings many benefits to the economy as a whole. Through the multiplier effect, the outcome is many times of the initial injection. Since tourism benefits about all parts of the economy [directly and indirectly], it definitely contributes to the standards of living. With tourism contributing 12.4% of our GDP and creating around 292,759 jobs, it must be an asset Hong Kong could not look lightly upon. However, there are many international competitions such as Beijing and Shanghai. China has concentrated in improving the image of Beijing [especially for the 2008 Beijing Olympics] and Shanghai, therefore attracting tourists to there. This will have a great impact on Hong Kong as a tourist destination. Since the price of goods and services in China are relatively cheaper than Hong Kong, so more people will prefer to go to Beijing and/or Shanghai. This will cause a shift in demand curve to the left because the demand of Hong Kong as a tourist destination has decreased. In order to keep the demand for Hong Kong as a tourist destination constant or even shift the demand curve to the right, Hong Kong must keep its good image as Asia's World City and an Events Capital of Asia to attract more tourists to visit Hong Kong. Tourism is beyond doubt an economic pillar of Hong Kong. ...read more.