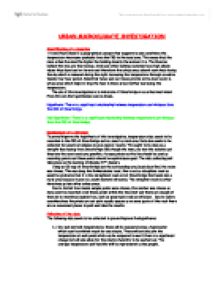 URBAN MICROCLIMATE INVESTIGATION Identification of a Question A rural Heat Island is a geographical concept that suggests in calm conditions the temperature decreases gradually from the CBD to the rural area. This means that the more urban the area/the higher the building density the warmer it is. The theories behind this idea are that tarmac, brick and other building materials have high albedo values than farm land or forests and therefore the urban areas absorb more heat during the day which is released during the night increasing the temperature through an entire twenty four hour period. Industrial fumes and car fumes provide extra cloud cover in urban areas which helps to trap the heat in these areas further increasing the temperature. The aim of this investigation is to determine if Stourbridge is an urban heat island. From this aim the hypothesises can be drawn. Hypothesis: There is a significant relationship between temperature and distance from the CBD of Stourbridge. ...read more.

Presentation of a Summery The conclusion that can be drawn from this investigation is that there is a significant relationship between temperature and distance from the CBD of Stourbridge. This suggests the presence of an urban heat island in Stourbridge's CBD. The experiment was not as accurate as it could have been, due to several factors, firstly change in weather conditions during the day; from a pressure chart is could clearly be seen that a front was moving over the area that morning. This may have affected the temperature making the results that were collected void. A better way to have conducted this experiment would have been to have twelve groups and stationed one group at each point and have got them to take the readings at the same time. The set of results which are probably least accurate are the wind directions as due to very weak winds that morning it was very hard to tell which direction the wind was coming from. This could have been improved by either doing the investigation on a windier day are using digital equipment. ...read more.

This starts out really well, clearly discussing what will be investigated and how it will be done. The lack of graphs is a shame as it would have been valuable to see what was being discussed. The analysis and conclusion sections need further depth and detail but over all a good investigation.
4 Stars