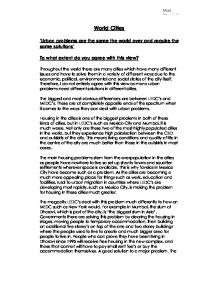 Urban problems are the same the world over and require the same solutions To what extent do you agree with this view?

World Cities 'Urban problems are the same the world over and require the same solutions' To what extent do you agree with this view? Throughout the world there are many cities which have many different issues and have to solve them in a variety of different ways due to the economic, political, environmental and social states of the city itself. Therefore, I do not entirely agree with this view as many urban problems need different solutions in different cities. The biggest and most obvious differences are between LEDC's and MEDC's. These are at completely opposite ends of the spectrum when it comes to the ways they can deal with urban problems. Housing in the cities is one of the biggest problems in both of these kinds of cities, but in LEDC's such as Mexico City and Mumbai, it is much worse. Not only are these two of the most highly populated cities in the world, but they experience high polarisation between the CBD and outskirts of the city. This means living conditions and quality of life in the centre of the city are much better than those in the outskirts in most cases. ...read more.

For example, In Manchester, The Hilton has been constructed and shows how space can be utilised efficiently in the city. This miniature skyscraper which is the tallest building in Manchester by quite a lot is adapted so that half of the space inside it has been converted into apartments which can be bought and so are ideal for people who work in the city. You can see how Housing Problems in MEDC's and LEDC's are similar but the solutions to the problem are completely different. Even though migration contributes to the massive urban problem of housing in cities, it is still in its own right a huge urban problem that needs it own solutions. Migration has caused many cities to come to a stand still as there simply too many people in an area. For Example, New York in rush hours around Times Square and other major squares can completely stop due to the amount of traffic that comes through that area. In LEDC's, such as Mumbai, the sheer amount of people in train stations causes on average 2 people a day to be killed on the railways there. ...read more.

The buildings were built with reinforced concrete but the structures weren't built with strong storey joints and they collapsed as soon as significant stress was put upon them. This means over 1,000 buildings in Kashmir that day pancaked and crushed everybody inside them. The urban problem of natural disasters in a MEDC is dealt with by a fine toothcomb. Since they have had the time to adjust to these natural disasters, they have developed many methods to ensure that if one of these natural disasters strikes, they are fully prepared. In the past where fatalities have occurred from building collapsing from earthquakes, when the new buildings have been built to replace them, they have been finely tuned into withstanding vibrations generated by an earthquake ensuring they do not collapse under the added stress from them. MEDC's are able to this as they have more disposable income to deal with and solve these problems. However, LEDC's cannot do that as easily. All in all, I can only agree with this statement slightly. After sharing my views on the MEDC's and LEDC's problems and solutions to urban problems, I believe it is clear to see how and why they differ. The world experience's the same urban problems, but the way in which they deal with them is completely different. ...read more.

Many key issues and problems have been covered, but the structure is a little difficult to follow at times. Some aspects that are focused more on LEDCs are not then fully compared to or considered in MEDCs and vice-versa. Some useful case studies are mentioned, which gives detail to the essay, but these are more descriptive than analytical and rarely are any direct contrasts or comparisons made between specific case studies. The final sentence gives a clear conclusion, but the remainder of the final paragraph is as vague as the first one. There are lots more opportunities to highlight the similarities, whereas the student focuses mainly on differences. Balance should be given to both in the essay and only at the conclusion would it be better to focus on one.