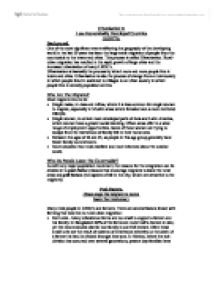 Urbanisation In Less Economically Developed Countries (LEDC's). Background. One of the most significant events affecting the geography of the developing world in the last 50 years has been the large-scale migration of people from the countryside to the towns and cities. This process is called Urbanisation. Rural-urban migration has resulted in the rapid growth of large cities and the increased urbanisation of many LEDC's. Urbanisation is basically the process by which more and more people live in towns and cities. Urbanisation is also the process of change from a rural society in which people lived in scattered to villages to an urban society in which people live in densely populated centres. Who Are The Migrants? Most migrants tend to be: * Single males, in Asia and Africa, where it is less common for single women to migrate, especially in Muslim areas where females have a more restricted lifestyle. * Single women, in certain more developed parts of Asia and Latin America, where women have a greater social standing. Urban areas offer m a wide range of employment opportunities. Some of these women are trying to escape from the restrictions of family life in their home area. * Between the ages of 16 and 35, as people in this age group generally have fewer family commitments. ...read more.

Positive effects of the countryside: * If it is mainly young people who migrate, the birth and natural growth rate will fall. * With fewer mouths to feed, farmers do not need to work the land intensively. * Migrants send back money to their family. Rural-urban migration brings little benefit to the cities, but many drawbacks. Positive effects on urban areas: * Migrants provide a young, cheap source of unskilled labour for the industries and services activities. Negative effects on urban areas: * Many LEDC's city authorities are unable to cope with the increase demand for housing, services and other facilities for the large number of in-migrants. * As farmland is used up for shanty developments, food shortages can follow. For example Egypt now have to import food because of the loss of land taken up by the growth of Cairo. * Large numbers of young people often increases the fertility, birth and growth rates of cities, which causes further increases in population and added pressure and strain on the urban services and developments. Consequences For The City and The Countryside. Consequences For The City. Favelas of Brazil, the bustees of Calcutta, the barrios of Bogota and Cairo's 'City of the Dead'. These squatter settlements are on eof the most serious consequences of rural-urban migration. ...read more.

Another reason is that houses are made of adobe (mud bricks) and are very small and basic, many mountain villages have no water and electricity supply, no sewage disposal systems, and no roads. Also education is limited to primary schooling and secondary schools are very rare. The country has many natural disasters such as earthquakes, floods droughts etc. The pull factors are that Lima's social and welfare services are much better in the city, life expectancy is 10 years longer in Lima also schooling is twice as long and there is better access to higher education in the city. Lima also has a university. Rural-urban Migration in Bangkok Bangkok, the capital of Thailand, had a population of 2 million in 1960 by 1990 there were 7 million people living there. The population of Mexico City has increased by 5 million in the last 10 years alone. While in Lagos in Nigeria, with a population of 8 million, is growing at a rate of 10% per year - an extra 2,000 people per day. So far rural-urban migration has been more significant in the Middle East and Asia, where there are stronger urban traditions, and in Latin America, where colonial influences have developed major urban centres. Until recently it has been less significant in most of Africa. ...read more.