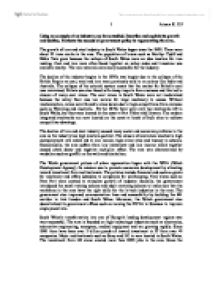 Using an example of an industry you have studied. Describe and explain its growth and decline. Evaluate the success of government policy in regenerating the area.

Using an example of an industry you have studied. Describe and explain its growth and decline. Evaluate the success of government policy in regenerating the area. The growth of iron and steel industry in South Wales began since the 1800. There were about 35 irons works in the area. The population of towns such as Merthyr Tydif and Ebbw Vale grew because the valleys of South Wales were an idea location for iron making. Coal and iron were often found together on valley sides and limestone was available nearby. The raw materials were easily accessible for the industry. The decline of the industry begins in the 1970s was largely due to the collapse of the British Empire as coal, steel and iron were previously sold to ex colony like India and Australia. The collapse of the colonial system meant that the market for British's coal was minimized. ...read more.

The area was characterized by vandalism such as graffiti on the walls and alcoholism. The Welsh government polices of urban regeneration began with the WDA (Welsh Development Agency). Its mission was to promote economic development by attracting inward investment from multinationals. The policies include financial aids such as grants for machinery and offers subsidies to companies for warehousing. New towns such as New Port were created to stimulate growth of industry. Socially, the government introduced the youth training scheme and adult retraining scheme to make sure that the workforce in the area have the right skills for the hi-tech industries in the area. The government also improved communication lines and accessibility by building the M4 corridor to link London and South Wales. Moreover, the Welsh government also decentralized its government offices such as moving the DVLA to Swansea to improve employment rate. South Wales's transformation into one of Europe's leading development regions was very successful. ...read more.

This also led to growth of leisure and tourism industry and in 1998 Cardiff was receiving about 15 million visitors. At Swansea there is a clear indication of positive economic development with 82% of work force are employed in the service industry. Moreover, the success of the building of M4 corridor brought positive effects to Newport. Newport has benefited from high technology industrial development of large science and business park home to AB Electronics and Panasonic. Despite present successes of Welsh government, it is questionable whether history will repeat itself and cause deindustrialisation of the hi-tech industries in the area again. As newly developed countries such as Taiwan and Malaysia are now progressing rapidly towards the hi-tech industries which could cause large influx of cheap electronic goods into Wales and its present European market. With the advantage of cheap, docile labour and more flexible laws in Asia, perhaps multinationals will again change their production location away from South Wales. ?? ?? ?? ?? 1 Arisara K. 13J ...read more.