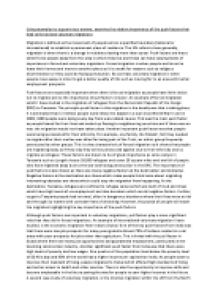 Using examples to support your answer, examine the relative importance of the push factors that lead to forced and voluntary migrations

﻿Using examples to support your answer, examine the relative importance of the push factors that lead to forced and voluntary migrations Migration is defined as the movement of people across a specified boundary (national or international) to establish a permanent place of residence. The UN refers to how generally, migration is when there is a change in residence lasting more than a year. Push factors are those which force people away from the area in which they live and these can have varying levels of importance in forced and voluntary migrations. Forced migration is when people are forced to leave their homes and move to another place as it is unsafe for reasons such as religious discrimination or they could be facing persecution. By contrast, voluntary migration is when people move away in order to get a better quality of life such as moving for to an area with better employment prospects. Push factors are especially important when there is forced migration as people have little choice but to migrate and so the importance of pull factors is lower. ...read more.

These factors are shown to be of great importance as some camps in Tanzania such as Lungufu house 30,000 refugees and cover 20 square miles and are full of people who have migrated away due to the war and facing persecution in the DRC. The importance of push factors is also shown as there are many negative factors at the destination and obstacles. Negative factors at the destination are those which make people think twice about migrating. Intervening obstacles are those which could stop the migration from happening. At the destination, Tanzania, refugees are confined to refugee camps which are built of mud and straw which have high levels of unemployment and also boredom which are all negative factors. Further, to get to Tanzania people had to travel, often in dangerous situations where their lives were at risk and through icy waters with constant fears of drowning. However, thousands of people still made the migration highlighting the key importance of the push factors. Although push factors are important in voluntary migrations, pull factors play a more significant role than they did in forced migrations. ...read more.

The main push factors were economic with the North suffering a declining secondary industry leading to high unemployment and limited investment in Northern Industries. By contrast, the South offered high amounts of investment and growth and better paying jobs. The North East had an average salary of £24,084 whereas London had an average salary of £35,238 showing why people would want to move to the South. There were also less significant push factors such as colder weather in the north and being far away from the decision making in Westminster. The south typically has warmer weather and Westminster is where decision making takes place. In this scenario, push factors were perhaps less important and the economic prospects of London were the pull factor which caused the migration. Overall, we can see how the push factors are relatively more important in forced migration as people have no choice to move away and to avoid the effects of the push factors. Often the destinations have little or no pull factors. With voluntary migration, push factors aren’t as important as pull factors also come into play and it is evident that both pull and push factors work together to help cause the migration. ...read more.