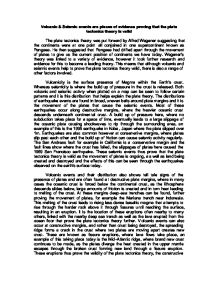 Volcanic &amp; Seismic events are pieces of evidence proving that the plate tectonics theory is valid

Volcanic & Seismic events are pieces of evidence proving that the plate tectonics theory is valid The plate tectonics theory was put forward by Alfred Wegener suggesting that the continents were at one point all conjoined in one supercontinent known as Pangaea. He then suggested that Pangaea had drifted apart through the movement of plates to give us the current position of continents we have today. Wegener's theory was linked to a variety of evidence, however it took further research and evidence for this to become a leading theory. This means that although volcanic and seismic events help to prove the plate tectonics theory valid, there is also a range of other factors involved. Vulcanicity is the surface presence of Magma within the Earth's crust. Whereas seismicity is where the build up of pressure in the crust is released. ...read more.

These seismic events thus prove that the plate tectonics theory is valid as the movement of plates is ongoing, as well as land being created and destroyed and the effects of this can be seen through the earthquakes observed on the earth's surface today. Volcanic events and their distribution also shows tell tale signs of the presence of plates and are often found at destructive plate margins, where in many cases the oceanic crust is forced below the continental crust, as the lithosphere descends slides below, large amounts of friction is created and in turn heat leading to melting of the crust. At these margins deep-sea trenches can be found, further proving the movement of plates, for example the Mariana trench near Indonesia. This melting of the crust leads to rising less dense basaltic magma that attempts to rise through the harder rock above it through fissures until reaching the surface, resulting in an eruption. ...read more.

Chain islands such as the volcanic Hawaiian Islands are also living proof that continental drift is taking place. This string of islands, all very similar in composition are neither near a destructive or constructive plate margin and are instead produced through a single hot spot. It is believed that the abnormally hot area of the mantle produces rising magma that eventually breaks through the crust forming shield volcanoes that eventually form an island, as seen in Hawaii. As the island becomes part of the plate, the on-going continental drift moves the newly formed island away from the hotspot, in turn deeming the volcano dead and the next volcano is formed as the plate moves. It is this movement that helps validate the theory of continental drift, In conclusion volcanic and seismic events provides strong evidence to validate the plate tectonics theory however without other evidence to help it cannot be seen as completely true. ...read more.

A very good review of the evidence surrounding plate tectonic theory. A strong answer is given referring to examples with good use of geographical terminology throughout. One improvement would be to incorporate more evidence into the conclusion.