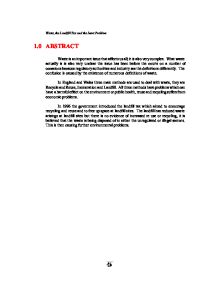 Waste, the Landfill Tax and the Inert Problem

Waste, the Landfill Tax and the Inert Problem 1.0 ABSTRACT Waste is an important issue that affects us all; it is also very complex. What waste actually is is also very unclear the issue has been before the courts on a number of occasions because regulatory authorities and industry see the definitions differently. The confusion is caused by the existence of numerous definitions of waste. In England and Wales three main methods are used to deal with waste, they are Recycle and Reuse, Incineration and Landfill. All three methods have problems which can have a harmful effect on the environment or public health, reuse and recycling suffers from economic problems. In 1996 the government introduced the landfill tax which aimed to encourage recycling and reuse and to free up space at landfill sites. The landfill has reduced waste arisings at landfill sites but there is no evidence of increased re use or recycling, it is believed that the waste is being disposed of in either the unregulated or illegal sectors. This is then causing further environmental problems. 2.0 CONTENTS: Page No. 1.0 ABSTRACT 1 2.0 CONTENTS 2 3.0 APPENDICES 3 4.0 INTRODUCTION 4 5.0 WHAT IS WASTE 6 6.0 CURRENT DISPOSAL METHODS 9 7.0 THE LANDFILL TAX 12 8.0 THE INERT PROBLEM 15 9.0 REGULATION 19 10.0 CONCLUESION 20 11.0 BIBLIOGRAPHY AND REFERENCES 22 2.0 APPENDICES: Appendix 1 Statutory Definition of Waste Appendix 2 Statutory Definition of Special Waste Appendix 3 Section 45 of the EPA 1990 Appendix 4 ECOTEC (2000) Survey Framework Appendix 5 My survey Appendix 6 Graphs Appendix 7 Exemptions in Full Appendix 8 Photographs 4.0 INTRODUCTION Mellanby (1992) blames the waste problem entirely on humans, he says, "before h**o sapiens appeared on earth, there was no real waste materials." By this, he means that in nature nothing is wasted, the bodies of dead animals and plants are efficiently recycled when they die. ...read more.

predicted that this would happen because construction companies would fly tip rather than pay increased waste disposal costs at landfill. Reeds (1997) suggests that fly tipping is purely done to reduce costs and hence increase profits, he calls the construction industry greedy and uncaring for the environment. It has also been suggested by Broad (1997) that the landfill tax has discouraged the redevelopment of brown field sites because of the cost of disposing of contaminated soils. This goes against current government policy to redevelop brown field sites rather than encroaching on to green belt land. Issues of waste management are complex, it is going to be very difficult for the country to reduce the waste that we produce if we want the country to continue to grow economically, Mellanby (1992) says that growth in waste production is linked with economic growth. I believe that the only way to improve our waste management strategy is to increase the re use and recycling of waste. I would like to call on the government to introduce a tax levy on the use of virgin materials at a level that would make recycled products affordable and recycling operations economically viable. Other suggestions have been made for the long-term disposal of waste Angel (1996) suggests the use of the deep oceans for waste disposal. Angel (1996) does suggest that much research needs to be done before we start using that option because we need to ensure that we don't damage the fragile ecology of the oceans. I feel that during this study I have only scratched the surface of many important issues. I believe it to be of great importance that detailed research is carried out on the inert problem to discover the whole truth about what is going on and what we can do to prevent it from happening in the future. I believe that an interesting area for further study would be to look at the international trade of waste that was highlighted by the voyage of the Khian Sea ship that was carrying special waste between 1986 and 1988. 11. ...read more.