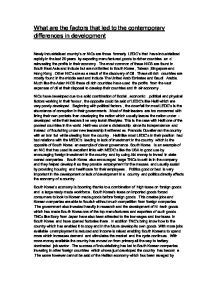 What are the factors that led to contemporary differences in development between countries?

What are the factors that led to the contemporary differences in development Newly industrialised country's or NICs are those formerly LEDC's that have industrialized rapidly in the last 20 years by exporting manufactured goods to richer countries and reinvesting the profits in their economy . The most common of these NICS are found in South East Asia and include but are not limited to South Korea , Taiwan ,Singapore and Hong Kong . Other NIC's are as a result of the discovery of Oil . These oil rich countries are mostly found in the middle east and include The United Arab Emirates and Saudi Arabia. Much like the Asian NICS these oil rich countries have used the profits from the vast expanses of oil at their disposal to develop their countries and their economy . NICs have developed due to a solid combination of Social , economic , political and physical factors working in their favour , the opposite could be said of LEDC's like Haiti which are very poorly developed . Beginning with political factors , the downfall for most LEDC's is the abundance of corruption in their governments . Most of their leaders are too concerned with lining their own pockets than developing the nation which usually leaves the nation under-developed while their leaders live very lavish lifestyles .This is the case with Haiti one of the poorest countries in the world .Haiti was ...read more.

As a direct consequence of unemployment ,crime rates are very high in Haiti . Gangs run large parts of Port Au- Prince the nations capital . With no jobs and no way to get an income people turn to crime to survive and while crime is all over the world LEDCs are most affected by crime as the countries are very poor to begin with .The education system is also affected by the economy , a good economy will usually lead to a good education system and vice versa .Facilities in schools are substandard and with a 53% literacy rate Haiti has one of the least literate population in the world .Education is vital to development as an educated workforce is qualified for jobs in the secondary and tertiary sectors . This is another reason why TNC's shun Haiti in favour of other countries as they need an educated workforce in this modern age and as Haiti has no natural resources to speak of companies involved in mining and farming are unlikely to settle there . Healthcare is also an issue in LEDC's and in Haiti's case it stems from a lack of doctors and lack of investment by the government . With the disasters that have been associated with Haiti over the years healthcare is important and the lack of reliable hospitals has led to a sick workforce which has not been able to push the country forward and help it develop . ...read more.

This is a perfect example of a natural resource being used to fund the development of a country to a point where the natural resource itself is no longer as important as the industry it helped build . Ultimately these factors have led to the contemporary differences in development between these two examples of LEDCs and NICs. The political and physical factors have affected the development of both these countries with the political factor just shading the physical factor when regarding the two sets in general . Countries with a good government usually encourage investment in their countries and investment is the first step to development along with education . The countries that have had good links with other governments have quickly developed while those without have stayed behind . The same applies for countries rich in natural resources , oil being the name resource here . Oil rich countries have used their resource to not just develop their countries but to develop them to a point where they are now considered tourist attractions and tourism is slowly replacing the export of oil as the main trade .In conclusion countries with a good government and natural resources or a combination of both are developed today . Those with corrupt governments are still LEDC's even with those that have natural resources as the government does not invest the money back into the country and development is not the first priority ...read more.