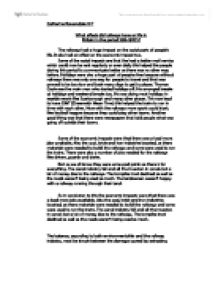 What effects did railways have on life in Britain in the period 1825-1870?

What effects did railways have on life in Britain in the period 1825-1870's? The railways had a huge impact on the social parts of people's life. It also had an effect on the economic impact too. Some of the social impacts are that the had a better mail service which could now be sent regularly or even daily this helped the people during this period to communicate better as there was no other way before. Holidays were also a huge part of peoples lives because without railways there was only one way for people to travel and that was proved to be too slow and took many days to get to places. ...read more.

Some of the economic impacts were that there was a load more jobs available. Also the coal, brick and iron industries boosted, as there materials were needed to build the railways and some were used to run the trains. There were also a number of jobs needed for the railways like drivers, guards and clerks. But as we all know they were some pad points as there is for everything. The canal industry fell and all the investors in canals lost a lot of money due to the railways. The turnpike trust declined as well as the roads weren't being used as much. The landowners weren't happy with a railway running through their land. ...read more.

The impact of the steam engine. This certainly enabled the spread and increase in factories as they no longer had to be built by rivers. It also changed and developed transport, i.e. trains and steamers. Iron and steel industries could expand due to steam power, more coal and therefore bigger machines to do the work. New inventions meant that steel could be produced cheaply and in large quantities, as well as being stronger, e.g . Bessemer and Siemens. The textile industries were also able to expand. Added to this the railways created masses of jobs and there was plenty of money available for investment in all sorts of industries. Catherine Ravensdale 10T ...read more.