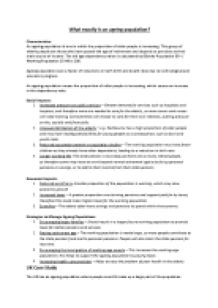 What exactly is an ageing population?

﻿`What exactly is an ageing population? Characteristics: An ageing population id one in which the proportion of older people is increasing. This group of elderly people are those who have passed the age of retirement and depend on pensions as their main source of income. The old age dependency ration is calculated by (Elderly Population 65+ / Working Population 15-64) x 100. Ageing populations are a factor of reductions in both birth and death rates due to technological and economic progress. An ageing population means the proportion of older people is increasing, which causes an increase in the dependency ratio. Social Impacts: 1. Increased pressure on public services ? Greater demand for services such as hospitals and hospices, and therefore more are needed to care for the elderly, so more carers and nurses will need training. Some families will choose to care for their own relatives, putting pressure on the, socially and financially. ...read more.

Raising retirement age ? The working population is made large, so more people contribute to the state pension fund and to personal pensions. People will also claim the state pension for less time. 3. Encouraging the immigration of working-age people ? This increases the working-age population; this helps to support the ageing population by paying taxes. 4. Increasing health care provision ? Helps to easy the problem of poor health in the elderly. UK Case Study The UK has an ageing population where people over 65 make up a large part of the population. Reasons: 1. Increasing life expectancy ? Currently 81.3 for women and 76.9 for men. 2. Baby Booms - Lots of babies were born during 1940?s and 1960?s and as this generation is beginning to retire and there are an increasing number of elderly people. 3. Falling birth rate ? There are few younger people, so the proportion of older people is greater. ...read more.

by the elderly, such as for travel and leisure), and socially in terms of as volunteers and as carers for relatives who would be unable to afford child care otherwise. To manage this ageing population the East Devon council has put management strategies in place: 1. Housing - Maintained secure accommodation, warden care, adapted housing (e.g. plugs and taps as hip level to avoid having to bend over), and sheltered housing for the opportunity for socialising. 2. Health Services ? Cost effective to keep the less sick at home for many deteriorative type illnesses (which puts additional pressures on care staff who do low paid work), and there has been some need for sheltered accommodation/therapy created. 3. Services and Amenities ? New leisure facilities to keep the elderly healthy in terms of physical and mental wellbeing, and new social environments/clubs. Charities are also vital to supporting this. 4. Transport Services ? New buses in rural environments that personally pick up individuals from their homes to take them into town to go shopping. ...read more.