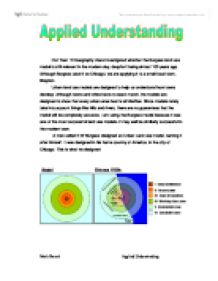 Whether the Burgess land use model is still relevant in the modern day, despite it being almost 100 years ago. Although Burgess used it on Chicago, we are applying it to a small local town, Blaydon. Urban land use models are designed to

Our Year 10 Geography class investigated whether the Burgess land use model is still relevant in the modern day, despite it being almost 100 years ago. Although Burgess used it on Chicago, we are applying it to a small local town, Blaydon. Urban land use models are designed to help us understand how towns develop. Although towns and cities have no exact match, the models are designed to show that every urban area has its similarities. Since models rarely take into account things like hills and rivers, there are no guarantees that the model will be completely accurate. I am using the Burgess model because it was one of the most successful land use models- it may well be similarly successful in the modern town. A man called E.W Burgess designed an Urban Land use model, naming it after himself. It was designed in his home country of America, in the city of Chicago. This is what he designed: Burgess' theory was that people competed for limited amounts of space. ...read more.

The amount of money different land users are willing to pay for the land depends on their location- the CBD has the most expensive rents. It is the most accessible area as most transport services are focused on the city centre, and main roads meet here. The more accessible a location, then the easier it is to get there. Therefore, people prefer to have work locations that people can access easily, and are also prepared to pay more for them. The Burgess Model also ignores the fact that nearly all towns are affected by physical features such as rivers, lakes and hills. It also ignores heavy industries, and housing redevelopment. Also, in 1924, there was not so much dependence on transport as there is today. Other weaknesses in the model include the criticism that in reality, zones do not just end, and the next one begins. Zones overflow, and the model is designed for highly developed cities such as Chicago, and not 3rd world cities that you might find in Ethiopia and Sudan. ...read more.

Hypothesis 3 The quality of life will improve with increasing distance from the CBD of Blaydon. This theory also fits into the burgess model because as you get further away from the CBD the environment qualities should increase and also better housing materials will be available. Hypothesis 2 links with this hypothesis because as the houses become younger, they will become more modern and better building methods will be being used. Quality of life will increase due to the steady increase of size in houses as you progress further from the CBD. Bigger houses mean more money and better quality of life. For example, big gardens and garages accompanied with driveways. In my view this is a better quality of life compared to terraced houses with no gardens. This hypothesis should be true because the house age will decrease and quality of life will increase as you move further form the CBD. Also the environment won't be as bad because the roads and air will be less congested. Maps Map of the Transect route ?? ?? ?? ?? Mark Barrett Applied Understanding ...read more.