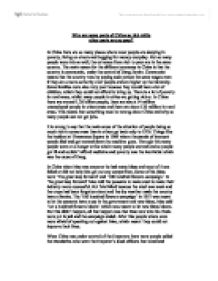 Why are some parts of China so rich while

Why are some parts of China so rich while other parts are so poor? In China there are so many places where most people are sleeping in poverty, living on streets and begging for money everyday. But so many people were rich as well, the extremes from rich to poor are in the same country. The main reason for the different economy in China is that the country is communist, under the control of Jiang Zemin. Communist means that the country runs by paying each person the same wages even if they are a more authority over people and are higher up the hierarchy. Some families were also very poor because they would have a lot of children, which they could not afford to bring up. There is a lot of poverty in rural areas, whilst many people in cities are getting richer. In China there are around 1.28 billion people, there are about 14 million unemployed people in urban areas and there are about 120 million in rural areas. This means that something must be wrong about China and why so many people can not get jobs. It is wrong to say that the main cause of the situation of people being so much rich in some areas than in others go back only to 1976. ...read more.

Throughout the period of the Cultural Revolution, China in effect cut off from the rest of the world. However, it still conducted trade relations with other countries it did not recognise, but only on a limited scale and with very little growth. Until 1976, three key elements were central to Mao's economic policy, these were the collectivisation of land, centralised control over the accumulation and reinvestment of capital, and state ownership of major industries and banks and entailing strict limitations on foreign capital and external economic factors. Land reform was the first step in the collectivisation of rural areas. However, the redistribution of land away from the landlords and rich peasants to smaller private holdings was not as successful as Mao initially hoped. Private farms were not a part of Socialist policy, and new divisions, exploitation and uneven land ownership showed signs of re-emerging. During the 1950s, therefore, collectives were established that enabled Mao to control the means of production even further, and were given quotas to supply the state with a portion of their output at pre-determined prices and also acted as pools of labour that could construct irrigation networks, roads and railway tracks. ...read more.

With the population getting greater and greater more and more people with no money which made the divide between rich and poor bigger. I think the reason for China being so different in economy is that the country had been so communist for many years that some people did not have good enough paid jobs and with so many children it was hard to pay for everything. The way that so many people did not have work and that China as a country did badly in exporting and importing, this made people have bad pay and long hours. This situation did not just go back from 1976 because of events like in Tiananmen Square. Deng Xioping is not to blame for the problem of poverty because he tried to help the workers by motivating them, but was just discredited by Mao. I think that that the most important person that helped create this problem was Mao because of his ideas and plans that went wrong and that when people tried to speak out and make a point across to him he just put them in jail and murdered them, so the Chinese people could not help themselves from him. ...read more.