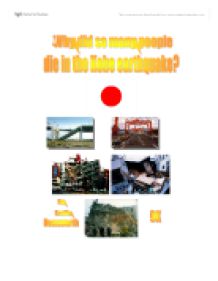 &quot;Why did so many people die in the Kobe earthquake?&quot;

Page Introduction. 1 Where, when and why? 2 The primary and secondary effects. 4 How well prepared the Japanese were. 6 How well people coped with the disaster. 7 How the authorities put things right. 8 Overall conclusion. 9 As a class we have been asked to investigate "Why did so many people die in the Kobe earthquake?" In this project I will be covering: 1.Where, when and why the earthquake happened and which plates were involved. 2.What the primary and secondary effects were. 3.How well prepared the Japanese people were for the earthquake. 4.How well people coped with the disaster. 5.How the Japanese authorities put thing's right afterwards. To do this I will be using my class work and searching the internet to help find pictures, diagrams and useful resources. Where? The earthquake happened in Kobe, in Japan, which is towards the south of the island, underlined in red on the map below. Kobe is situated on flat land between high mountains and the sea. It is an important route centre because it has motorway (Hanshin Expressway) and intercity ('bullet train') railway lines passing through it and a large modern port, which handles millions of tonnes of trade each year. When? At 5:46am (while many citizens were still asleep) on the 17th of January, 1995 the huge earthquake struck measuring 7.2 on the Richter scale. ...read more.

7. Children who lost out on education may not get such good jobs in the future. All this happened just from 20 seconds of an earthquake. Japan thought they were prepared for any earthquake because they had spent lots and lots of money on hi-tech equipment, which they thought would detect such an event. However, it didn't work because you cannot detect earthquakes, they just suddenly happen, when the tectonic plates give way. As a result of this, they had not put any thought or money into emergency services and drills. There wasn't enough equipment, staff or any planning in case it did ever occur. They were busy non-stop. One witness said, "We never saw any emergency services, just families helping each other out of the rubble." It was so long since the last earthquake, that the public didn't know what to do when it hit them either, they weren't prepared at all! They had never been given any guild lines or rules on what they should and shouldn't do in an earthquake. It really was a catastrophe! In the end Japan had to ask for help from abroad. This included getting sniffer dogs, to sniff out bodies under rubble, all the way from Switzerland. The people coped terribly because it was such a shock to them, especially as they hadn't been prepared. They had to live in emergency shelters or camp outside in -0? ...read more.

It wasn't the people's fault that they weren't ready, because it came totally out of the blue. There wasn't anything anybody could do to stop it. But, however, the government could've helped more by spending their money on more important things. Such as: * More earthquake proof building regulations, to prevent them falling down. * Emergency services, staff, preparation (planning) and equipment. * General awareness campaigns to the public, giving advice on what to do in an earthquake and practicing emergency drills. These ideas could've saved thousands of lives if done properly. It's so simple; I don't know how they managed to go so wrong! If people like me can understand and work out how to prepare for an earthquake, then what kind of fools were running the country at the time and not taking the right actions?!! And, who influenced them to do so?! Overall, I think the Kobe earthquake was a complete disaster. It wasn't anyone's fault that it happened, but if I had to blame anybody for the high amount of deaths it would be the government. Even though Japan has got loads and loads of money, they didn't spend it wisely and because of it probably the whole population suffered in some way. In my opinion they took careless, unthoughtful actions before hand, without a backup plan, which cost thousands of people their lives, which can never be repaid for, no matter how much money there is! ...read more.