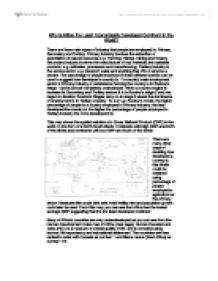 Why is Africa the least economically developed continent in the World?

Why is Africa the Least Economically Developed Continent in the World? There are three main types of industry that people are employed in; Primary, Secondary and Tertiary. Primary industry involves the extraction or exploitation of natural resources e.g. Farming, fishing, mining and forestry. Secondary industry involves the manufacture of raw materials into saleable products, e.g. refineries, processors and manufacturing. Tertiary industry is the service sector, e.g. transport, sales and anything that offers anyone a service. The percentage of people employed in these different sectors can be used to suggest how developed a country is. If a country' main employment sector is Primary industry or subsistence farming the country is in Rostow's Stage 1 and is almost completely undeveloped. When a country begins to increase its Secondary and Tertiary sectors it is in Rostow's stage 2 and has begun to develop. Rostow's Stages carry on to stage 5 where the dominance of employment is in Tertiary Industry. To sum up Rostow's model, the higher percentage of people in a country employed in Primary industry, the less developed the country is, the higher the percentage of people employed in Tertiary industry the more developed it is. This map shows the spatial variations in Gross National Product (GNP) ...read more.

In this area, eastern Africa includes such countries as Ethiopia, Somalia, and Uganda. Among the nations of Central and West Africa are Angola, Cameroon, Ghana, Nigeria, and the Democratic Republic of the Congo. Southern Africa is dominated by the country of South Africa, and also includes Botswana, Lesotho, and Namibia. Sub Saharan Africa's climate is mostly hot and humid with a high annual temperature and high rainfall. Southern Africa is mainly arid or semi arid, with a long dry season. Africa is very rich in mineral resources, possessing most of the known mineral types of the world, many of which are found in significant quantities, although the geographic distribution is uneven. Africa has some of the world's largest reserves of gold, diamonds, copper, bauxite, manganese, nickel, platinum, cobalt, radium, germanium, lithium, titanium, and phosphates. Traditionally, the vast majority of Africans have been farmers and herders who raised crops and livestock for subsistence. Manufacturing and crafts were carried out as part-time activities. A few states developed long distance trade systems, and in these places complex exchange facilities as well as industrial specialization, communication networks, and elaborate governmental structures maintained the flow of commerce. But overall trade in Africa was limited by transportation and communication difficulties, and by differences in currency and other incompatibilities. ...read more.

Most former British colonies in Africa continue to have loose trade relations with Great Britain and keep monetary reserves in London. Sub Saharan Africa is the world's least developed region, using the HDI as a measure of development, the bottom 19 countries are all in Africa. Africa is a very dry continent in which is the World's largest hot desert, the Sahara. The Sahara has an area larger than the whole of Europe and is inhabited by few people due to the extreme weather conditions. The rest of Africa generally has a wet and dry season, however, the length and intensity of these seasons are hard to predict and change immensely from year to year. This makes it difficult for a continent that is reliant on agriculture to break away from subsistence farming and produce a surplus. There is an increasing amount of desertification occurring in Africa where the deserts, especially the Sahara are becoming larger, enveloping area around them. This process is partly due to the deforestation of areas of forest; with no roots to hold soil in place, it blows away leaving an infertile desert. The weather system El Ni�o also affects Africa. El Ni�o is the periodic warming of the Pacific Ocean that occurs once every five to seven years. In 1997-98 El Ni�o caused extremely heavy floods in some parts and drought in others ...read more.