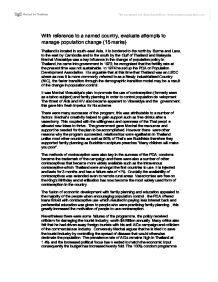 With reference to a named country, evaluate attempts to manage population change

With reference to a named country, evaluate attempts to manage population change (15 marks) Thailand is located in south-east Asia, It is bordered to the north by Burma and Laos, to the east by Cambodia and to the south by the Gulf of Thailand and Malaysia. Mechai Viravaidya was a key influence in the change of population policy in Thailand, he came into government in 1973; he recognised that the fertility rate at the present time was not sustainable. In 1974 he set up the PDA or Population Development Association. It is arguable that at this time that Thailand was an LEDC where as now it is more commonly referred to as a Newly Industrialised Country (NIC), the faster transition through the demographic transition model may be a result of the change in population control. ...read more.

It is injected and lasts for 3 months and has a failure rate of <1%. Crucially the availability of contraceptives was extended even to remote rural areas. Vasectomies are free on the King's Birthday and sterilisation has now become the most widely used form of contraception in the country. The fusion of economic development with family planning and education appealed to the majority of the people when encouraging population control, the PDA offered loans linked with contraceptive use which resulted in paying less interest back and preferential education was given to people who were practising family planning, this greatly increased the motivation of people to use contraception. Nevertheless there were some failures of the programme, the policy received criticism for damaging the tourist industry, worth $4 Billion annually. Many critics also felt that he had driven away foreign tourists with his anti AIDs campaign and criticism of the commercial sex industry. ...read more.

Contraception use is at an all time high of 79% compared to just 15% in 1970 however this has only rose by 11% from 1990. The population had expected to reach around 67 million by 1990 without Mechai's intervention; it was almost a decade later when the population reached this point. The gross national product has also risen from $110 US in 1970 to 1840$ US in 2010 however it is ambiguous to whether the influence of the PDA can take acclaim for this. In 1997 the prevalence rate of AIDs was 2% and now in 2010 it is 1.4% although the decrease appears to be minor the estimated prevalence rate would be ten times higher than it is without the PDA and Mechai's drive against the spread of AIDs. In conclusion I believe the successes of the program far outweighs the negatives, although it may have cost the tourist industry the money saved and reduced disease as a result of the program was indispensable to Thailand. ...read more.

A very good answer that is focused on the question posed. It discusses key aspects of the policy and in the conclusion, it uses data to clearly evaluate the success of the policy. To improve further, additional data and specific examples from particular regions would have strengthened some of the points made.
4 stars