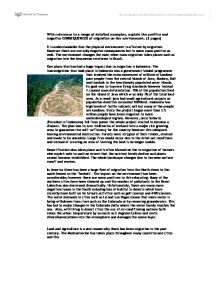 With reference to a range of detailed examples, explain the positive and negative CONSEQUENCES of migration on the environment.

With reference to a range of detailed examples, explain the positive and negative CONSEQUENCES of migration on the environment. (2 pages) It is understandable that the physical environment is affected by migration. However there are not only negative consequences but in some cases positive as well. The environment changes the most when mass migration takes places such as migration into the Amazonian rainforest in Brazil. One place that has had a huge impact due to migration is Indonesia. The transmigration that took place in Indonesia was a government funded programme that involved the mass movement of millions of landless poor people from the central islands of Java, Madura, Bali and Lombok to the less densely populated outer islands. Its goal was to improve living standards however instead it caused mass deforestation. 70% of the population lived on the island of Java which w as only 7% of the total land area. As a result java had small agricultural outputs as population densities exceeded 1000km2. Indonesia has high levels of fertile volcanic soil but many of the people are landless. Since the project began more than 3.5 million people have been migrated to more underdeveloped regions. However, once Suharto (President of Indonesia) fell from power the whole project started to become a disaster. ...read more.

Miners and loggers in many forest areas also hunt for meat or pay local hunters to hunt for them, which can result in severe reduction in wildlife populations. Migrants face the choice of moving on in search of new opportunities or staying to develop new livelihoods. For example, Miners in the Zambian Copperbelt region confronted this choice when the declining price of copper on the world market resulted in the closure of mines over the past few decades. Many of those formerly employed in the mining industry and its associated services remained in the region, moving into rural areas around the towns to practice slash-and-burn agriculture, charcoal production and livestock rearing, threatening the ecologically sensitive Miombo woodland. However this is beginning to turn its self around as the copper prices are firm and the old are new mines are now operational . In Brazil, government subsidies and construction of roads in the 1960s resulted in a westward expansion of people to tap the vast interior wealth of the Amazon. Several government-sponsored programs initially provided free land and food for six months in Rondonia and elsewhere to attract migrants However, many of the original settlers faced severe problems due to poor soils and declining yields, long distances to markets, difficulties in land titling and lack of credit. ...read more.

Deforestation occurred within 3 days and over 300 hectartes of Mount Goma had been destroyed, the sudden influx of migrants caused irreversible damage to the vegetation. An estimated 7,000 -10,000 m3 of wood and grass were being collected from the park by refugees every day from August to December 1994. Water diseases such as Cholera began to spread and the only water source was Lake Kivu and this was sometimes up to 10km away. Water needed to be brought in. 60 trucks were used daily to carry up to 2 million liters of water per day to 68 locations in the campsites. Chlorine was added as the trucks left the Lake, and after traveling for 90 - 120 minutes, was suitable for consumption. Sanitation soon started to become a big problem as well. There were no toilets Refugees defecated where they stood, slept and ate. The situation was no better when many had moved out of Goma to the other sites. All were situated on volcanic rock - no holes could be dug - either to defecate, or bury their dead. This has caused mass damage to the environment and unfortunately this will takes centuries to return back if it ever will. As the population continues to increase this will continue to make migration increase, there are ways that people can try and minimize the impact on the environment however it is starting to become too late. ...read more.