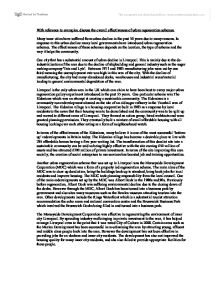 With reference to examples, discuss the overall effectiveness of urban regeneration schemes

With reference to examples, discuss the overall effectiveness of urban regeneration schemes Many inner cities have suffered from urban decline in the past 30 years due to many reasons. In response to this urban decline many local governments have introduced urban regeneration schemes. The effectiveness of these schemes depends on the location, the type of scheme and the way it helps the community. One city that has a substantial amount of urban decline is Liverpool. This is mainly due to the de-industrialisation of the area due to the decline of shipbuilding and general industry such as the sugar making company 'Tate and Lyle'. Between 1971 and 1983 manufacturing jobs were cut by one third meaning the unemployment rate was high in this area of the city. With the decline of manufacturing, the city had many abandoned docks, warehouses and industrial areas/material leading to general environmental degradation of the area. ...read more.

The Eldonian village has become a desirable place to live with 295 affordable homes having a five year waiting list. The transformation of this derelict site into a sustainable community can be said as being highly effective with the site owning �50 million of assets and has attracted �100 million of private investment. In terms of the site improving this area socially, the creation of social enterprises to run services has boosted job and training opportunities. Another urban regeneration scheme that was set up in Liverpool was the Merseyside Development Corporation (MDC) which was a form of a property led regeneration scheme. The main aims of the MDC was to clear up dereliction, bring the buildings back up to standard, bring back jobs for local residents and improve housing. The MDC took planning responsibility from the local council. One of the main redevelopments set up by the MDC was Albert Dock in the 1980s and 90s. ...read more.

The development has also not improved the housing quality for many inner city residents, and ahs also failed to provide appropriate facilities for these people. Gentrification can also be seen as an urban regeneration scheme. The is the renovation of property on a private and individual level leading to the reimaging of areas. A main example of gentrification can be seen in Notting Hill, London. This is a bustling urban area of London which in the 1950s was an area of slims and inner-city deprivation and was a place of rioting in the 1960s and 70s. In the past 30 years gentrification has occurred here and can be seen as being effective as many houses here cost more than upmarket Mayfair. Overall many urban regeneration schemes can be seen as effective in improving the economies and environment of many city centres seen in both Liverpool and London. However in terms of improving the areas socially many schemes can be seen as ineffective by not providing the facilities that many inner city residents require such as local services and jobs. ...read more.

This is a very good response as it discusses the effectiveness of several different examples with lots of detail. This shows that the student has researched and learnt about each place in depth, rather than simply learning the location. Hence, ...

This is a very good response as it discusses the effectiveness of several different examples with lots of detail. This shows that the student has researched and learnt about each place in depth, rather than simply learning the location. Hence, this strengthens the argument as each point is supported by examples. The facts and figures included also add to the essay and show extra effort taken by the student to learn these. Additionally, the writer comes to a clear conclusion after considering both sides of the argument; they clearly state that urban regeneration schemes can be effective in some ways and ineffective in others. This is necessary as many essay answers do not tailor themselves to the question enough, and hence do not gain high marks.

The analysis in this essay is good as the student explores each example in depth and discusses the ways in which it provides for both the effectiveness and the ineffectiveness of urban regeneration. Considering both sides of the argument is vital as it shows deep understanding and suggests a more balanced, unbiased argument.

The essay is clearly written with a logical, conventional structure. The introduction gives an overview of why urban generation schemes have been used, however I think it could be improved by adding a definition of what the schemes are. This is followed by the main body fo the argument. The paragraphs are separated clearly; each time a different scheme or different type of analysis is spoken about, a new paragraph begins. Finally, the conclusion concisely sums up the argument. Furthermore, there are no problems in spelling, grammar and punctuation.