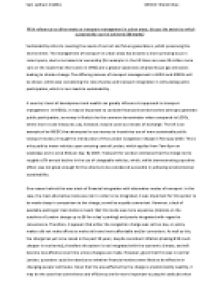 With reference to transport management in urban areas, discuss the extent to which sustainability can be achieved (40 marks)

﻿Sam Larlham 13AMA GEOG3: World Cities With reference to either waste or transport management in urban areas, discuss the extent to which sustainability can be achieved (40 marks) Sustainability refers to meeting the needs of current and future generations, whilst preserving the environment. The management of transport in urban areas has become a more pressing issue in recent years, due to increased car ownership (for example: in the UK there are now 30 million more cars on the roads than there were in 1950) and a greater awareness of greenhouse gas emissions leading to climate change. The differing natures of transport management in LEDCs and MEDCs will be shown, whilst also considering the role of policy and transport integration in stimulating public participation, which in turn leads to sustainability. A country?s level of development and wealth can greatly influence its approach to transport management. In MEDCs, it may be important to consider financial incentives when aiming to generate public participation, as money is likely to be the common denominator when compared to LEDCs, where more crude measures, say, livestock, may be used as a means of exchange. The UK is an example of an MEDC that attempted to use money to incentivise use of more sustainable public transport modes, through the introduction of the London Congestion Charge in February 2003. ...read more.

Second, the scheme (like London) showed a lack of integration in terms of alternate modes. Despite an improvement of the inner city Metrobus, no improvements were made to trains and or buses running routes from the city outskirts to the centre, meaning that in many cases residents had no choice but to use a car as alternatives were inconvenient and inefficient. Given Mexico?s level of development, it is likely that they will experience an urban sprawl in the future; therefore in the long-term it becomes even more important to have a far-reaching and integrated transport system to avoid the same problem. This again shows how a high level of integration is vital in encouraging public participation in sustainable transport schemes. Freiburg is a German (and therefore MEDC) ?eco-city? which attempted to achieve a well-integrated transport system in its management. In doing so, they targeted a fall in car use to help become a more sustainable city in terms of air pollution and the use of non-renewable resources. One method of doing so was to incentivise bicycle use. This was done using the ?bike and ride? scheme, a 500km network of cycle lanes which created links with public transport systems as well as providing roughly 9000 bike parking sites in Freiburg, showing high integration levels. Furthermore, roughly 90% of residents now live in a 30km/h zone, a traffic calming measure that has made urban cycling safer, demonstrating integration with other transport policies. ...read more.

As such, it is clear that Curitiba has achieved economic, social, and environmental sustainability almost entirely due to its level of integration. Therefore, it seems that the role of transport and policy integration is paramount in the extent to which sustainability can be achieved, as shown by Curitiba. When comparing LEDCs and MEDCs, there are few discernible differences in the successes and failures of their management schemes: London and Mexico City were unable to achieve sustainability due to a lack of integration, whereas Freiburg and Curitiba were more successful when to opposite was true. However, one key difference between the two levels of development is to do with changes to transport systems over time. In terms of infrastructure changes, LEDCs may be at an advantage as they are still urbanising, and so can construct modern and integrated infrastructures in their cities with sustainability in mind. In contrast, MEDCs such as the UK experienced industrial revolutions over a century ago and as such have Victorian age railways, for example, meaning that the mode is less likely to be efficient and sustainable. In conclusion then, LEDCs are more likely to achieve sustainability, as they can tailor city planning to meet human needs, rather than simply change transport policy, thus allowing a fully integrated transport system that stimulates public participation. ...read more.