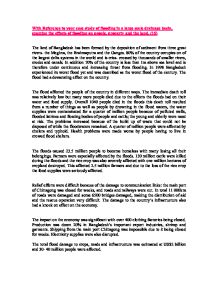 With Reference to your case study of flooding in a large scale drainage basin, examine the effects of flooding on people, property and the land.

With Reference to your case study of flooding in a large scale drainage basin, examine the effects of flooding on people, property and the land. (15) The land of Bangladesh has been formed by the deposition of sediment from three great rivers- the Meghna, the Brahmaputra and the Ganges. 80% of the country occupies on of the largest delta systems in the world and is criss- crossed by thousands of smaller rivers, creeks and canals. In addition 70% of the country is less than 1m above sea level and is therefore under continuous and increasing threat from flooding. In 1998 Bangladesh experienced its worst flood yet and was described as the worst flood of the century. The flood had a devastating effect on the country. The flood affected the people of the country in different ways. The immediate death toll was relatively low but many more people died due to the effects the floods had on their water and food supply. ...read more.

Relief efforts were difficult because of the damage to communication links: the main port of Chittagong was closed for weeks, and roads and railways were cut. In total 11 000km of roads were damaged and some 6500 bridges damaged, making the distribution of aid and the rescue operation very difficult. The damage to the country's infrastructure also had a knock on effect on the economy. The impact on the economy was significant with over 400 clothing factories being closed. Production was down 20% in Bangladesh's important export industries, shrimp and garments. Shipping from the main port Chittagong was impossible due to it being closed for weeks. Electricity supplies were also disrupted. The total flood damage to crops, roads and infrastructure was estimated at US$2 billion and 30- 40 million people were affected. Although the floods have many negative impacts on Bangladesh they do also have their benefits. As well as providing water for crops, when flooding occurs, as there is friction between the water and the surface of the land, the water slows down and loses its energy. ...read more.

Fishing is a major source for the poor and the fish provide 75% of dietary protein and over 10% of annual export earnings. The relatively high level of fish production is attributed to the nutrient rich delta of the three river system. During flood water filled depressions and floodplains become inter- connected and integrated into a single biological production system. This cycle enables brood stocks and young fish and pawn species to migrate up and downstream in the rivers as well as laterally, into and out of the floodplains. The floods also replenish groundwater reserves. Groundwater is an important resource of Bangladesh and is used for both domestic and agricultural needs. A deep aquifer at about 60- 120m in depth has been identified in many parts of the country and has been used for irrigation purposes. The aquifer recharge zone is some distance upstream from the coast, along major rivers, and any increase in salinity increases the cost of exploration and pf pumping costs. Floods play a very important role in groundwater recharge. ...read more.