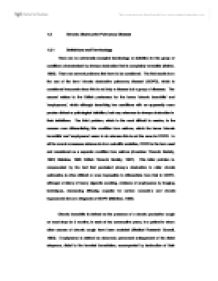 1.2 Chronic Obstructive Pulmonary Disease 1.2.1 Definitions and Terminology There are no universally accepted terminology or definition for the group of conditions characterised by airways obstruction that is completely reversible (Snider, 1996). There are several problems that have to be considered. The first results from the use of the term 'chronic obstructive pulmonary disease' (COPD), which is considered inaccurate since this is not truly a disease but a group of diseases. The second relates to the British preference for the terms 'chronic bronchitis' and 'emphysema', which although describing two conditions with an apparently more precise clinical or pathological definition, lack any reference to airways obstruction in their definitions. The third problem, which is the most difficult to resolve, is the concern over differentiating this condition from asthma, which the terms 'chronic bronchitis' and 'emphysema' seem to do whereas this is not the case for COPD. In all the recent consensus statements from scientific societies, COPD is the term used and considered as a separate condition from asthma (American Thoracic Society, 1995; Siafakas, 1995; British Thoracic Society, 1997). This latter problem is compounded by the fact that persistent airways obstruction in older chronic asthmatics is often difficult or even impossible to differentiate from that in COPD, although a history of heavy cigarette smoking, evidence of emphysema by imaging techniques, decreasing diffusing capacity for carbon monoxide and chronic hypoxaemia favour a diagnosis of COPD (Siafakas, 1995). Chronic bronchitis is defined as the presence of a chronic productive cough on most days for 3 months, in each of two consecutive years, in a patient in whom other causes of chronic cough have been excluded (Medical Research Council, 1965). Emphysema is defined as abnormal, permanent enlargement of the distal airspaces, distal to the terminal bronchioles, accompanied by destruction of their walls and without obvious fibrosis (Snider et al, 1985). Thus chronic bronchitis is defined in clinical terms, whereas emphysema is defined pathologically. ...read more.

In 1984 British death rates for COPD for both sexes were exceeded only by Romania. As mentioned above, international comparisons of mortality are complicated by the use of different diagnostic labels. In the UK, chronic bronchitis was the most common certification of such deaths until a separate code for chronic airways obstruction not elsewhere classified was introduced in 1978, thereafter termed COAD and which has been used increasingly. Within the UK, age-adjusted death rates from chronic respiratory diseases vary by a factor of more than five in men and more than 10 in women in different geographical locations (Office of Population Censuses and Surveys, 1993). Mortality rates tend to be higher in urban areas and there is a trend for higher rates in South Wales and Scotland independent of urbanization. Mortality from chronic respiratory disease in males aged 55-84 years has been falling, except in the oldest age group over 75 years of age. In the USA, similar trends have been recorded in males, whereas in women the mortality in one-third that of males; the decline in mortality, which was recorded until 1975, has since shown a slight increase in women over the age of 65 years (US Department of Health and Human Services, 1984). These trends presumably relate to the differences in the time of the peak prevalence of cigarette smoking in men and women, which occurred later in women. In England and Wales in 1992 there were 3,873 deaths certified as due to chronic bronchitis, 1,946 due to emphysema, 1,791 due to asthma an 19,963 due to COAD (Office of Population Censuses and Surveys, 1993). Together these accounted for 6.4% of all male deaths and 3.9% of all deaths in females (Office of Population Censuses and Surveys, 1993). Similar percentages of the total death rates occurred for COPD in Scotland. The association between respiratory diseases and social class in the UK is well recognised. ...read more.

and a cohort study (Sandler et al, 1989). These studies show a trend towards an increased relative risk from passive smoking, similar to that of lung cancer but not powerful enough to demonstrate statistical significance. Passive smoking does not appear to have a convincing effect on pulmonary function in middle-aged adults (Fielding & Phenow, 1988). However, in a study of young adult non-smokers, cumulative lifetime exposure to environmental tobacco smoke during childhood was associated with significantly lower peak levels of FEV1 in adulthood (Masi et al, 1988). Maternal smoking in pregnancy is associated with low birthweight (Brooke et al, 1989) and smoking by either parent is associated with an increased incidence of respiratory illness in the first 3 years of life (Fielding & Phenow, 1988). Studies of the relationship between parental smoking and lung growth in childhood have produced inconsistent findings (Lebowitz et al, 1987; Tager et al, 1983). Increased airways resistance occurs after smoking only one cigarette (Guyatt et al, 1970). This can be blocked by atropine, suggesting that it could be an irritant receptor reflex-induced phenomenon (Sterling, 1967). Air Pollution Interest in air pollution as a risk factor in chronic respiratory disease was stimulated by the London smog of December 1952 (Ministry of Health, 1954), to which 4,000 excess deaths due to cardiorespiratory disease were attributed among the elderly, particularly those with poor cardiorespiratory reserve. Several studies in the 1950s, 1960s and early 1970s produced evidence incriminating air pollution as an aetiological factor in COPD including: 1. The association, in the UK, between increasing mortality and prevalence of COPD and increasing urbanisation (Holland, 1965; Lambert & Reid, 1970). 2. The close association between atmospheric pollution and mortality from COPD both geographically and temporarily (Martin, 1964). 3. The demonstration that post office employees in foggy areas showed a higher rate of invalidity than those working in less foggy areas (Fairbairn & Reid, 1958). 4. The increase in reported symptoms of chronic bronchitis in areas of increased air pollution (Waller, 1978). 5. A higher prevalence of emphysema in autopsy studies in areas with a greater pollution (Waller, 1978). ...read more.