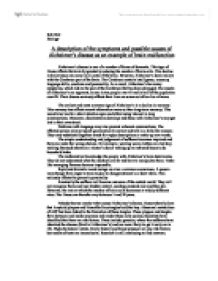 Rob Holt Biology A description of the symptoms and possible causes of Alzheimer's disease as an example of brain malfunction Alzheimer's disease is one of a number of forms of dementia. This type of illness affects the brain by gradually reducing the number of brain cells. This decline in brain tissue can occur in all parts of the brain. However, Alzheimer's deals mainly with the Cerebrum part of the brain. The Cerebrum controls intelligence, memory, language skills, emotions and personality. As a result, Alzheimer's has many symptoms, which link to the part of the Cerebrum that has been damaged. ...read more.

Moreover, disorientation develops and those with Alzheimer's may get lost in their own street. Problems with language may also prevent coherent conversations. The affected person may not speak grammatically correct and talk in a child-like manner. They may substitute forgotten words for vague descriptions or make up new words. The simple understanding and judgement of sufferers becomes impaired and they can make the wrong choices. For example, wearing warm clothes on a hot day, wearing Bermuda shorts on a winter's day or waking up at awkward hours to do household tasks. The mathematical knowledge the people with Alzheimer's have deteriorates. ...read more.

The illness can therefor vary between 3 and 20 years. Nobody knows exactly what causes Alzheimer's disease. Researchers believe that Amyloid plaques and Neurofibrillary tangles hold the key. Abnormal metabolism of APP has been linked to the formation of these tangles. These plaques and tangles form between and inside neurones and render those cells useless. Scientists have identified that there are risk factors. These include genetics, where the sufferers have inherited the disease (familial Alzheimer's) and are more likely to get it early on in life. High cholesterol intake, family history and blood pressure are also risk factors but results of tests are inconclusive. Research is still continuing to find answers. ...read more.