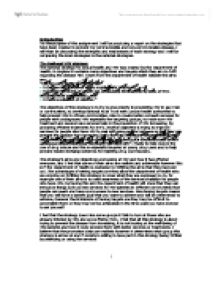 A report on the strategies that have been created to prevent my communicable and non-communicable diseases.

Introduction For the purpose of this assignment I will be producing a report on the strategies that have been created to prevent my communicable and non-communicable disease, I will than be discussing the strengths and weaknesses of each strategy and I will be comparing the local strategies to the national strategies. The National HIV strategy The national strategy for sexual health and HIV was created by the Department of Health, in England it contains many objectives and targets which they aim to fulfil regarding the disease HIV. Taken from the department of health website the aims are: "The key aims of HIV prevention are: � To reduce the number of newly acquired HIV infections; � To reduce the levels of unsafe sex (measured, for example, by rates of STIs including rectal gonorrhoea); and � To raise awareness of services." The objectives of this strategy is to try to give priority in preventing HIV in gay men or communities, to develop national AIDS Trust with London health authorities to help prevent HIV in African communities. Also to create better outreach services for people with undiagnosed HIV especially the targeting groups, to make sure HIV treatment and several care services help in the prevention of HIV increasing, by providing efficient treatments for STI's. Another objective is trying to improve services for people who have HIV to deal with issue around safe sex so that they can prevent the disease from spreading "as a first step the Health Development Agency and Terrence Higgins Trust have produced a resource guide for professional on HIV and sexual health promotion for people who have HIV". Finally to help reduce the use of drug misuse and this is especially targeted at young drug users and to help provide needle exchange schemes for injecting drug use misusers. The strategy's aims and objectives are looking at HIV and how it has affected everyone, and I feel that some of their aims are realistic and achievable however this is if the Department of Health is dedicated to fulfilling the aims that they have set out. ...read more.

* Celibacy- the problem with practising celibacy is that you will not be able to produce children because you will not be sexually active, with your partner the only way a person would be able to produce children is if they decided to stop being celibate. * Tests- some people may refuse to take the tests, therefore they would not know if they have contracted HIV or any other STI so may be putting themselves and partner or future partners at risk. The main problem with the HIV test is that you firstly do one test which is not always accurate that is why health clinics ask you to come back after 6 months to do a repeat test, so people have to wait for 6 months in order for them to know if they have contracted HIV or not, however the first test does tend to be accurate. * Not using drugs/sharing needles- people who take drugs may find it difficult to stop using the drugs and my also find it difficult to separate themselves from friends who also take drugs. Some individuals may risk having HIV even though they are knowledgeable about the disease because, some people may be under the influence or drugs/alcohol therefore may not really consider the fact that they are not protecting themselves from HIV during sexual intercourse, some people may be ignorant to the fact or just may not know that having unprotected sex or sharing needles can lead to HIV, this could be due to lack of proper guidance or education The main factors that I believe would lead to prevention to HIV The factor that I feel could lead to the prevention of HIV is more education in schools especially secondary schools because teenagers are more prone to unprotected sex so I feel that they should be educated into knowing the risks of unprotected sex, I know this because as we can see in this statistic "Teenage girls living in deprived areas are four times ...read more.

Also the ways in which people can be educated may be seen as a problem, for example the use of leaflets some people may choose not to read them because they may find them boring/unattractive or some people might just not have the time to read them. The main factors that I believe would lead to prevention of Breast Cancer A factor that I believe would lead to the prevention of this disease is the change of people lifestyle choices I think that this is the only thing people can do in order for them to prevent themselves getting breast cancer. Many lifestyle choices contribute to our health for example if people maintain a diet where they are on a low intake of alcohol there is a chance that they are less likely to get Breast cancer I was able to find this table on the cancer research UK campaign to back up my argument taken from www.cancerresearchuk.org viewed 22/03/07 A significant association between alcohol intake and breast cancer has been found, with an increase of risk of 7% for each alcoholic drink consumed on a daily basis Around 4% of breast cancers in women in developed countries may be attributable to alcohol. What I understand from this table is that the more a person drinks the more it increases your chance of getting breast cancer this suggests to me that alcoholism is definitely affecting your chances of breast cancer which is why I believe people should try to decrease their intake of alcohol, I am not even suggesting that people should avoid it because if we look at the table people who do not drink alcohol still have a chance of having breast, but we can also see that people who do not drink alcohol are unlikely to get breast cancer between 20-35. This basically leads me to saying that people need to change their lifestyle choices in order for people to try to prevent themselves getting breast cancer ?? ?? ?? ?? 1 Lola Makanjuola Mrs Jackson Unit9: Understanding Diseases Group 2 AO4 10 ...read more.