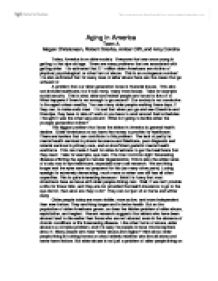 Aging in America Team A Megan Christensen, Robert Dzierba, Amber Clift, and Amy Concha Today, America is an older society. Everyone that was once young is getting to that ripe old age. There are many problems that are associated with getting older. It is estimated that 2.1 million older Americans are victims of physical, psychological, or other form of abuse. This is an outrageous number! It is also estimated that for every case of elder abuse there are five cases that go unheard of. A problem that our older generation faces is financial issues. This also can include healthcare, but it has many, many more issues. Take for example social security. This is what older and retired people are forced to live off of. What happens if there is not enough to go around? Our society is not conducive to the aged unless wealthy. You see many older people working these days, if they can, to make ends meet. It is sad that when you go and see Grandma and Grandpa, they have to take off work or you have to work around their schedules. I thought it was the other way around. What is it going to be like when the younger generation retires? ...read more.

It is right in our midst: Most incidents of elder abuse don't happen in a nursing home. Occasionally, there are shocking reports of nursing home residents who are mistreated by the staff. Such abuse does occur, but it is not the most common type of elder abuse. At any one time, only about 4 percent of older adults live in nursing homes, and the vast majority of nursing home residents have their physical needs met without experiencing abuse or neglect. Most elder abuse and neglect takes place at home. The great majority of older people live on their own or with their spouses, children, siblings, or other relatives; not in institutional settings. When elder abuse happens, family, other household members, and paid caregivers usually are the abusers. Although there are extreme cases of elder abuse, often the abuse is subtle, and the distinction between normal interpersonal stress and abuse is not always easy to discern. There is no single pattern of elder abuse in the home. Sometimes the abuse is a continuation of long-standing patterns of physical or emotional abuse within the family. Perhaps, more commonly, the abuse is related to changes in living situations and relationships brought about by the older person's growing frailty and dependence on others for companionship and for meeting basic needs. ...read more.

An estimated 20% of older adults in the community and as many as 50% in nursing homes suffer from depression. Older Americans have the highest suicide rate of any age group, and depression is its foremost risk factor. Although older adults comprise only 13% of the population, they account for 20% of the suicide deaths in our country. Depression in older adults not only causes distress and suffering but also leads to impairments in physical, mental, and social functioning. Because depression tends to be a recurrent disorder, many older adults will have experienced previous bouts of depression and will be at increased risk. Risk factors for late-onset depression include: widowhood, physical problems, educational attainment less than high school, impaired functional status, and heavy alcohol consumption. Depressed older adults tend to utilize health services at high rates, engage in poorer health behaviors, and evidence what is known as "excess disability." The older Americans are facing some hard times. Some say it is as hard or harder than fighting in some of the wars many of them fought. The most important issue that is facing them today is abuse. In our group, we all agreed this was the worst. It is sometimes hard to detect abuse. Most older folks who are abused are afraid to say anything for feat of the abuser. ...read more.