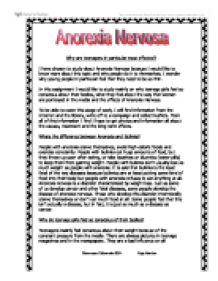 Anorexia nervosa - Why are teenagers in particular most effected?

Why are teenagers in particular most effected? I have chosen to study about Anorexia Nervosa because I would like to know more about this topic and why people do it to themselves. I wonder why young people in particular feel that they need to be so thin. In this assignment I would like to study mainly on why teenage girls feel so conscious about their bodies, what they feel about the way that women are portrayed in the media and the effects of Anorexia Nervosa. To be able to cover this stage of work, I will find information from the Internet and the library, write off to a campaign and collect leaflets. From all of this information I find I hope to get photos and information all about the causes, treatment and the long-term effects. Whats the difference between Anorexia and Bulimia? People with anorexia starve themselves, avoid high-calorie foods and exercise constantly. People with bulimia eat huge amounts of food, but they throw up soon after eating, or take laxatives or diuretics (water pills) to keep them from gaining weight. People with bulimia don't usually lose as much weight as people with anorexia. It is said that bulimia is the least fatal of the two diseases because bulimics are at least putting some kind of food into their body but people with anorexia refuses to eat anything at all. ...read more.

This rewards the patients for eating regular meals and as the patient gains weight the hospital will give them privileges. The treatment doesn't only involve changing the persons eating pattern but the patient often needs counselling for a year or more so that it can change the feelings that are causing the persons eating habits. This counselling is called psychotherapy. The only type of medicines that is used to help the recovery is anti-depressants. The doctor or counsellor gives these to them. What are the effects? Anorexia has many symptoms that make it easy for someone to detect. People with anorexia have dry skin and thinning hair on the head. They may even have a growth of fine hair all over their body. Girls who have anorexia will eventually stop having menstrual periods, this is otherwise known as amenorrhea. The National Institute of Mental Health estimates that one in ten anorexics ends in death from starvation, suicide or medical complications like heart attacks or kidney failure. They also include physical problems like anaemia, heart palpitations, bone loss, tooth decay and inflammation of the oesophagus. The disease not only effects the victim but it effects the people around them. Their friends and family who support them will go through a very hard time. Their family should always be there for them and they should try not to give up on them. ...read more.

During adolescence the influence of peers becomes important. This is the time where teenagers are particularly aware of the pictures in the media and the pressures from peers. Accepting teenage girls body changes throughout puberty is also important for an adolescent girls father. If a father feels uncomfortable about his daughter going through puberty and distances himself from her she may reject herself and try and do something to stop it like anorexia. My essay fits into a theme. This theme is Aesthetic and Communicative because it's the way that we advertise products, we should make it so that anybody can model products any shape or size. Also it's the way that we communicate with our family and friends, we shouldn't be worried to chat about things that are on our minds to people. Then they will be able to help us and give us advice. In conclusion I think that we should stop advertising in magazine and adverts on television featuring petite, thin young women/girls because this causes jealousy and makes people think that if they diet and exercises a lot then they will look just like they do. Another way to stop it is to inform people about anorexia nervosa and tell them more about what and how it happens, we should post flyers or write reports in newspapers about real life stories. We could also encourage people to eat healthier and exercises more often instead of not eating at all and starving themselves to death. ...read more.