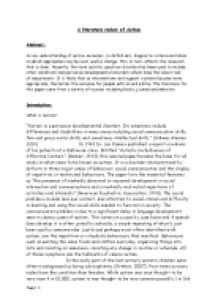 ﻿A literature review of Autism Abstract: As our understanding of autism increases, so definitions, diagnostic criteria and ideas on which approaches may be most useful, change. This, in turn, affects the research that is done. Recently, the term autistic spectrum disorder has been used to include other conditions and pervasive developmental disorders which have the same triad of impairments. It is likely that as interventions and support systems become more appropriate, the better the outcome for people with an asd will be. The literature for this paper came from a variety of sources including books, journal and websites. Introduction: What is Autism? ?Autism is a pervasive developmental disorder. Its symptoms include differences and disabilities in many areas including social communication skills, fine and gross motor skills, and sometimes intellectual skills.? (Volkmar,Wiesner 2009) In 1943 Dr. Leo Kanner published a report on eleven of his patients at a Baltimore clinic. Entitled ?Autistic Disturbances of Affective Contact.? (Kanner, 1943), this seminal paper became the base for all study on what came to be known as autism. It is a disorder characterized by deficits in three major areas of behaviour, social communicative and the display of repetitive or restricted behaviours. ...read more.

Because children with autism often look perfectly normal physically it was thought that the condition was wholly psychogenic, or purely in the mind (BaronCohen,2008). Brain scanning technology has allowed science to probe the autistic brain and discover that there are many physical differences when compared to typical brains. Children with autism will have more grey and white brain matter as youngsters. Eventually, the grey matter will stop increasing but white matter will continue to increase, giving an autism patient more connective white tissue than ?neurotypical? people through their lives. Often the amygdala and the hippocampus of the autistic patient are smaller than average. This may play a role in some of the social deficits seen later in an autistic child's life. Recently, there has been a scare concerning child vaccination and whether vaccines could play a role in autism. Spurred on by one faulty study, the idea that vaccines can cause autism has no evidence behind it and is now seen as biologically implausible (Paul, 2009). Very few people with severe to moderate autism live independently, but some are very successful (Howlin, Goode, Hutton & Rutter, 2004). Temple Grandin, an autism advocate and author who doubles as a doctor of animal science at Colorado State University. ...read more.

Social stories provide an individual with accurate information about those situations that he may find difficult or confusing. The situation is described in detail and focus is given to a few key points: the important social cues, the events and reactions the individual might expect to occur in the situation, the actions and reactions that might be expected of them, and why. The goal of the story is to increase the individual?s understanding of, make them more comfortable in, and possibly suggest some appropriate responses for the situation in question. Conclusion: Science has little to say about the individual case. Autism is so variable and individuals with an asd so different, that a particular child may benefit from a particular approach at a particular time. Teaching is more of an art than a technology and an inspired and dedicated teacher (whether this is a professional or a parent) can often succeed against the odds, with whatever approach he or she believes in. But by recognizing and studying this aspect of cognitive development the research community have provided a guide for treatments, understanding for families and people with autism and a direction forward for future research. Hopefully, someday, research of this kind can lead to the detection of the root cause of ASDs. ...read more.