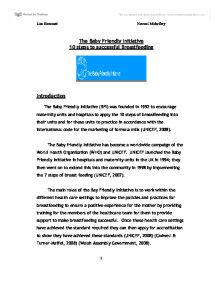 the 32nd week of their pregnancy, including positioning and attachment, skin to skin contact and the importance of skin to skin, and why it is important to avoid dummies and formula milk etc. This step also insists that pregnant women should not be taught how to prepare a formula feed in antenatal classes and that all paperwork, leaflets, posters etc should not have anything on them that may promote formula feeding and dummies (unicef, 2008). Step 4) "Help mothers initiate breastfeeding soon after birth"-this should involve skin to skin contact between mother and baby as soon after the delivery as possible and then to provide support to encourage breastfeeding when the baby shows signs of wanting to feed (unicef, 2008). Step 5) "Show mothers how to breastfeed and how to maintain lactation, even if they should be separated from their infants"-all mothers should be asked if they need help with additional breastfeeding six hours after delivery and should also be shown how to express their milk by hand (unicef, 2008). Step 6) "Give newborn infants no food or drink other than breastmilk other than medically indicated"-unless the mother has made an informed choice or there is a medical reason that prevents the baby from breastfeeding (unicef, 2008). ...read more.