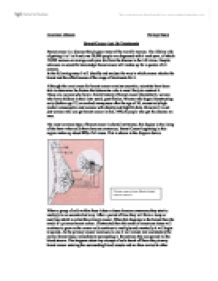 Breast Cancer And Its Treatments.

Lawrence Johnson Biology Essay Breast Cancer And Its Treatments Breast cancer is a disease that plagues many of the world's women. The lifetime risk of getting it is 1 in 9 and over 39,000 people are diagnosed with it each year, of which 12,800 women on average each year die from the disease in the UK alone. Despite advances in scientific knowledge Breast cancer still makes up for a quarter of all cancers. In the following essay I will identify and analyse the way in which cancer attacks the breast and the effectiveness of the range of treatments for it. Although the exact cause for breast cancer remains uncertain, scientists have been able to determine the factors that determine who is most likely to contract it. These are; women who have a family history of breast cancer (hereditary), women who have children in their later years, post thirties, Women who began menstruating early (before age 12) or reached menopause after the age of 50, excessively high alcohol consumption and women with obesity and high fat diets. However it is not just women who can get breast cancer in fact, 30% of people who get the disease are men. ...read more.

One method of surgery is Lumpectomy; this is where the lump or tumour is removed, as well as the surrounding tissue if this is also cancerous. Another surgical option is Partial Mastectomy; this is where the cancer tissue is removed along with a portion of the surrounding breast tissue and the lining over the chest muscle below the tumour. Some lymph nodes under the arm may be removed and radiation therapy could follow. A more serious option is Total mastectomy; this involves the removal of the entire breast, but the under laying tissue is left intact. As you can imagine this is only done when cancer has spread quite a lot and surgeons try to avoid this method as it causes major disfiguration. This is shown in the diagram below. As you can imagine there are many possible implications following surgical treatment for breast cancer. General implications are; Temporary swelling and tenderness (but this is common with any surgery), Hardness from scar tissue at the surgical site (which can sometimes be quite large) and possible wound infection. A more serious implication can be serious breast disfiguration, which can be emotionally damaging for the patient and is expensive to disguise with plastic surgery. ...read more.

Some of which are proving to be very promising. One method that is being tested in America is Laser Therapy. Laser therapy destroys these cells by using a laser beam, which is pointed at them by a probe. Another method is Cryotherapy, it destroys the cells by freezing them, again using a small probe. Both of these methods are already used to destroy other non-malignant cells, but scientists are saying that it could possibly be used to treat cancer cells. It would be very beneficial if it could, as it is a very quick treatment supposedly with very few side effects. In conclusion, Breast cancer treatments available at the moment are vast in their variety and huge improvements have been made over the last 50 years. However, there are still many people that die from the disease each year. So there is stillroom for improvements in testing methods and treatment methods. Scientist at the moment are working hard to make advancements and I do believe that in the next 50 years may be we will have a cure and will be able to slash statistics that daunt many women all over the country. Sources Used Professional Development, Nursing Times. Volume 92 published 1996 Rhode Island Cancer council Inc. Cancer back up, http://www.cancerbacup.org.uk/questions/tests.htm Advanced Biology, C.A. Clegg Breast Cancer care association, http://www.breastcancercare.org.uk ...read more.