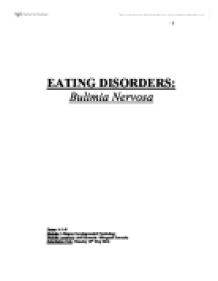 EATING DISORDERS: Bulimia Nervosa Name: A.L.B Module: Lifespan Developmental Psychology Module Leader(s): Jeff Edwards / Margaret Ferrario Submission Date: Monday 10th May 2004 Within developmental lifespan psychology, eating disorders are often categorised under the heading of 'adolescence problems' along with suicide, delinquency, substance misuse and pregnancy. They are particularly associated with females, especially during the development stage of adolescence when one's physical, cognitive and social development leaves childhood and enters adulthood (Seifert et al, 1997: 333). It appears that young women are more dissatisfied with weight than women at any other stage of the female lifespan. This is due to an increase in awareness of their body shape and weight, therefore accounting for the large majority of eating disorder cases being adolescent females (90%) (Kayrooz 2001: 20). Problematic eating behaviours are becoming a growing concern as the number of cases increase (especially in the last 20-30 years) and especially as younger age groups are being affected. Bulimia nervosa (bulimia) is the most common eating disorder today. However it was only identified as a disorder in 1979 when a rapid increase in the condition was established (Gross, 2001: 657). Bulimia shall now be studied in relation to psychological aspects, definitions, prevalence, symptoms, complications, treatment and possible causes. "Bulimia is a syndrome characterised by episodes of binge eating followed by compensatory behaviour such as vomiting and purging, along with other techniques to compensate for over eating" (Banyard, 2001: 88). Bulimia affects 1-2.8% of the population, yet it is estimated that 20% of adolescent girls (2.5 million) ...read more.

However the sample does not prove equal in terms of participants. Nevertheless, Bhugra & Bhui (2002) agree, as they too revealed Asians were more likely to indulge in compulsive eating, again providing evidence against the idea that eating disorders are specifically related to Westernised culture. However, all who participated were East London students, making findings difficult to generalise. In addition, validity of these two studies can be questioned, as although Asian, they were living in England and therefore were not entirely free from Westernised society. Streigel-Moore et al (1986) specifically studied bulimia in relation to gender, claiming bulimia is a predominantly female disorder because women rather than men accept and internalise cultural norms. Hayes & Ross (1987) suggest that the traditional housewife role can be used as an explanation for women's disturbed body image and their vulnerability to eating disorders. As for women at home, physical appearance is a more important contribution to self-esteem than for women who work. Therefore this suggests those women who stay at home are more likely to suffer from bulimia. However if this was true then the prevalence of bulimia should be expected to have decreased in society, as more women are now choosing to go to work than ever before. Silverstein et al (1986) also studied gender differences, relating them to the mass media. Their study suggested thinness in society is promoted by the mass media and that popular female characters in TV shows and magazines are more likely than male characters to be exceedingly thin, thus justifying the reason for more women suffering from eating disorders. ...read more.

The aim of treatment for bulimia is to reduce/eliminate binge eating and purging behaviour. Treatments include nutritional therapy, psychotherapy and medication. These three major treatments can be used individually but are often combined to produce the most successful approach, with different treatments working for different sufferers. Establishment of a pattern of non-binge meals, improvement of attitudes, encouragement of healthy levels of exercise, and resolution of other problems such as anxiety and depression are among the specific aims of the three major treatments. The most effective form of treatment tends to be cognitive behavioural therapy (CBT), a form of psychotherapy (Wilson, 1999), ranging from a 50%-90% decrease rate in binge-eating behaviour (Alexander-Mott, 1994: 215). CBT usually involves identifying distorted negative thoughts about appearance and body image and helps a sufferer to learn to identify the cues that trigger a bingeing episode. However, antidepressants have been found to be effective at the beginning of treatment and can also be used as an on-going treatment to prevent relapse. However, Wilson (1999) found that the most effective strategy for treating bulimia was to combine CBT with medication, as adding antidepressant drugs to CBT enhances the improvement in co-morbid conditions. However, the specific patient determines the effectiveness of treatment, with success rates for treatment at 50-70%, with relapse rates of between 30-50%. In conclusion, no one specific cause for bulimia has been found, although many factors have been linked to the onset of the disorder. Bulimia can vary in terms of its severity, medical complications and treatment methods, with the disorder predominantly affecting female adolescents, with numbers significantly increasing. ...read more.