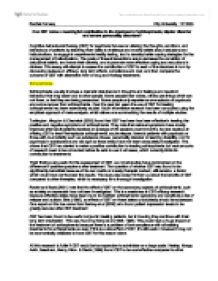 Can CBT make a meaningful contribution in the treatment of schizophrenia, bipolar disorder and severe personality disorders? Cognitive behavioural therapy (CBT) for psychosis focuses on altering the thoughts, emotions, and behaviours

Can CBT make a meaningful contribution in the treatment of schizophrenia, bipolar disorder and severe personality disorders? Cognitive behavioural therapy (CBT) for psychosis focuses on altering the thoughts, emotions, and behaviours of patients by teaching them skills to challenge and modify beliefs about delusions and hallucinations, to engage in experimental reality testing, and to develop better coping strategies for the management of hallucinations. The goals of these interventions are to decrease the conviction of delusional beliefs, and hence their severity, and to promote more effective coping and reductions in distress. This essay will attempt to assess the contribution of CBT to each of the disorders in turn by discussing reviews on efficacy, long term effects, compliance and cost, and then compare the outcome of CBT with alternative form of drug and therapy treatments. Schizophrenia Schizophrenia usually involves a dramatic disturbance in thoughts and feelings and results in behaviour that may seem odd to other people. Some people hear voices, others see things which are not there, or feel they are being persecuted. Some people only experience one episode of psychosis and some recover from schizophrenia. Over the past ten years the use of CBT for treating schizophrenia has been extensively studied. Much informative research has been conducted using the empirical approach of meta-analysis, which allows one summarizing the results of multiple studies. Turkington, Kingdon & Chadwick (2003) found that CBT has been has been effective in treating the positive and negative symptoms of schizophrenia. ...read more.

Zaretsky, Segal, Gemar (1999) evaluated the effects of CBT combined with medication and just medication, following CBT patients sustained a 64% reduction in measures of depressive symptoms, how ever improvements in dysfunctional thinking proved insignificant. Lam, Bright, Jones, Hayward, Schuck, Chisolm et al (2001) recently compared 12 patients who received CBT and routine care to 11 patients who received routine care alone, both for 6 months. They found at the end of the 12 month follow up period, patients receiving CBT to report "fewer recurrent episodes, greater affective stability and improved overall functioning and better compliance with prescribed medication." The studies brought down do show a mix of findings. On the whole they indicate CBT to have a significant improvement on treatment compliance by the patient but not on all aspects of patient well being. This was reflected in a summary of recent psychotherapy treatment by Blagys and Hilsenroth (2002) who found the relationship between CBT and patient outcome has yielded discrepant results. While some authors have demonstrated a favourable relationship between specific CB processes and patient improvement (Feeley, DeRubeis, Gelfand, 1999; Tang and DeRubeis, 1999; Tang and Whisman, 1993) whilst other researchers have reported a lack of (or negative) relationship between specific CBT interventions and outcome. This essay needs to address whether CBT specifically performed any better then the other psychotherapies mentioned in order to understand its contribution to treatment. Sullivan (2005) comments that psychotherapy by itself regardless of whether its cognitive, behavioural, or psychodynamic, has not been proven effective in the treatment of bipolar affective disorder. ...read more.

has gone into much depth reviewing past literature, so the best I can do is follow the same line of thought that CBT has little of limited efficacy in treated severe personality disorders. Conclusion: The general conclusion for this essay is that CBT seems to have made a meaningful contribution mostly in the treatment of schizophrenia but also in the treatment of bipolar disorder. From a literature review it is evident that much more research is required especially with regards to the long term effect of CBT and comparisons with other psychosocial treatments. It is also evident that both these disorders are treated most effectively when used alongside drug treatments. Rosenhan and Seligman (1995) found Depression best treated with CBT, electro convulsive therapy and medicated drugs, whilst they found to be schizophrenia best treated with drugs and family intervention therapy. In relation to severe personality disorder there is little evidence to suggest the effectiveness of CBT, but this might change with third wave variations that could be tailored for each condition. It is suggested that each therapy works best with a particular set of problems which is why it's hard to compare the effectiveness of CBT on the different variations of personality disorders. Wampold (2001) found the variance of effectiveness of treatment is more due to therapist than it is due to treatment and comments that "a person with a need of psychotherapy should seek the most competent therapist possible without regard for various therapies". In general CBT has started to make a meaningful contribution in the treatment of Schizophrenia and Depression, but the evidence is less compelling in the case for severe personality disorders. ...read more.