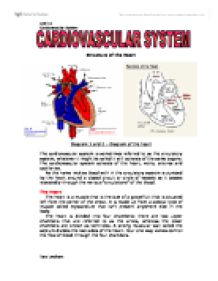 Structure of the Heart Diagram 1 and 2 - Diagram of the heart The cardiovascular system is sometimes referred to as the circulatory system, whatever it might be called it still consists of the same organs. The cardiovascular system consists of the heart, veins, arteries and capillaries. As the name implies blood with in the circulatory system is pumped by the heart around a closed circuit or circle of vessels as it passes repeatedly through the various "circulations" of the blood. The Heart The heart is a muscle that is the size of a grapefruit that is situated left from the center of the chest. It is made up from a special type of muscle called myocardium that isn't present anywhere else in the body. The heart is divided into four chambers: there are two upper chambers that are referred to as the arties, whereas the lower chambers are known as ventricles. A strong muscular wall called the septum divides the two sides of the heart. Four one way valves control the flow of blood through the four chambers. The rhythmic automatic repeated beating of the heart is maintained by electrical impulses that begin in the bodies natural paste maker that is founding the sinoatrail node. Aorta This significant artery is the largest blood vessel in the body, it arches out from the left heart ventricle. ...read more.

The heart is controlled by the automatic nervous system that has two branches namely the sympathetic nervous system and the parasympathetic nervous system. The two systems act like a brake and accelerator on the heart. The two systems supply a special cluster of cells in the upper part of the right atrium; this is called the Sino- Atrial Node (S-A node) sometimes referred to the 'pacemaker'. Every few seconds the S-A node sends nerve impulses across the branching network of atrial muscle fibers that causes a contraction. These impulses are caught by another group of cells, these cells form the Atrio-Ventricular Node (A-V Node) and impulses are then relayed to a band of conducting tissue made up from large muscles cells called Purkinje fibers. Blood Vessels Arteries The arteries carry blood away from the heart to different areas of the body. Blood carrier's oxygen in it and without oxygen all the cells within the body will die. The walls of the arteries are made up of very strong elastically muscles because the arteries have to with stand high pressures of blood as it is pumped out of the heart. Blood will flow quickly around the arteries in pulses. The walls of the arteries are made up of three layers: * A thick outer layer of collagen fibers * A thick elastic layer of muscle fibers are arranged in rings * A thin lining layer Veins Veins carry deoxygenated blood back to the heart. ...read more.

The two main problems that occur are: * Valves that don't shut properly, causing regurgitation of blood back across the valve in the wrong direction (for example, from the aorta back into the heart). * Valves that won't open properly, known as stenosis of the valve, which means blood flow through the valve is limited. If the problem is mild, it may go unnoticed. However, it can put excessive strain on the heart, making it swollen, less effective as a pump and more likely to have an abnormal rhythm. It can also result in a backlog of pressure, causing fluid to accumulate in the lungs and lower leg. Defective heart valves are also more vulnerable to infections from bacteria entering the bloodstream. This is why people with diseased heart valves should always take antibiotics when they have surgery or major dental work. Aneurysm An aneurysm is an abnormal bulge or "ballooning" in the wall of an artery. An aneurysm that grows and becomes large enough can burst, causing dangerous, often fatal, bleeding inside the body. Most aneurysms occur in the aorta and are referred to as a thoracic aortic aneurysm. Aneurysms also can occur in arteries in the brain, heart, intestine, neck, spleen, back of the knees and thighs, and in other parts of the body. If an aneurysm in the brain bursts, it causes a stroke. Many cases of ruptured aneurysm can be prevented with early diagnosis and medical treatment. ?? ?? ?? ?? Unit 13 Cardiovascular System Tara Leedham ...read more.