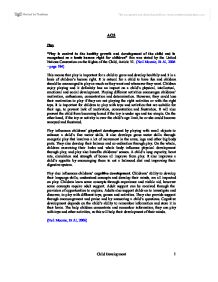 AO3 Play "Play is central to the healthy growth and development of the child and is recognised as a basis human right for children" this was stated by the United Nations Convention on the Rights of the Child, Article 31. (Neil Moonie, Et Al, 2006 - page 194) This means that play is important for a child to grow and develop healthily and it is a basis of children's human right. It is natural for a child to have fun and children should be encouraged to play as much as they want and whenever they want. Children enjoy playing and it definitely has an impact on a child's physical, intellectual, emotional and social development. Playing different activities encourages childrens' motivation, enthusiasm, concentration and determination. However, they could lose their motivation to play if they are not playing the right activities or with the right toys. It is important for children to play with toys and activities that are suitable for their age, to prevent lack of motivation, concentration and frustration. It will also prevent the child from becoming bored if the toy is under age and too simple. On the other hand, if the toy or activity is over the child's age limit, he or she could become annoyed and frustrated. Play influences childrens' physical development by playing with small objects to enhance a child's fine motor skills. It also develops gross motor skills through energetic play that involves a lot of movement in the arms, legs and other big body parts. They also develop their balance and co-ordination through play. On the whole, children exercising their limbs and whole body influence physical development through play, and play also benefits childrens' senses. A child's lung capacity, heart rate, circulation and strength of bones all improve from play. It also improves a child's appetite by encouraging them to eat a balanced diet and improving their digestive system. ...read more.

An example of this is using a tree for shelter. Object play This type of play involves the use of the child's ability to hand-eye co-ordinate to entertain itself for playing. A typical example of this is a child bouncing a ball continuously on the spot. Role play This type of play is the use of re-enacting day-to-day activities, which are not personal. An example of this is pretending to ride a motorbike through town. (Neil Moonie, Et Al, 2006) Hughes theory of play related to Jayden in the sense that Jayden actively participates in all the types of play. His most common form of play out of the fifteen is locomotor play. This is because he is able to run around using all the physical abilities in his body. He loves running around, as he is a very hyper child, especially when playing with other children. His favourite type of locomotor play is when he plays chase and hide and seek with his other peers at school. This is because there is a lot of space in the playground for Jayden and his peers to run around during lunch times. This helps develop Jayden's physical ability, as well as improving his circulation, his joints and limbs, his lung capacity, and above all, digests the foods he ate during lunchtime, providing Jayden with a good digestive system. However, Jayden also enjoys object play. This is because he is able to learn different hand-eye co-ordinations. For example, Jayden loves playing on his bike; this involves Jayden using hand-eye co-ordination to make sure he steers the bike in a straight line, whilst knowing where to go. He also needs to make sure he has balance whilst riding the bike, or else he could fall off and hurt himself. Jayden is very good at riding his two-wheeled bike and never has problems with his balance. He also knows how to stay in a straight line whilst riding in confined spaces. ...read more.

This is because of Piaget's stage of symbolic play. This is when Jayden begins to make-believe games from real life situations, i.e. the car existing in real life is imagined in the game to be real. Driving cars are surrounded in Jayden's environment, which is where I think he got the idea of pretending to drive a car. This is because he is not able to drive a car in a real life situation, as he is too young. By Jayden imagining this play, it has made him feel good about himself as he feels that it is the closest he will get to drive a car at this time in his life. This also develops Piaget's last stage of games and rules. This is because Jayden made up his own rules of his play. He thought about this before playing his game. This shows that he was able to abide by his own rules by planning out what he set out to achieve from the game. Practice play was also used as Jayden interacted with the game on his own. This is because other people would not understand what Jayden is imagining mentally, as everybody thinks different. Lastly, Hughes' theory of imaginative play also had an impact on Jayden's play. Hughes believed that imaginative play is when a child uses a figment of their imagination and pretends it is real so they can play. This is definitely the idea that Jayden had in mind, as he was thinking of cars in his head, and then decided to pretend play with cars. This also works in conjunction with Hughes' theory of fantasy play. This is because this type of play is used when a child rearranges a real life situation to act it out. This is acted out, as it is unlikely to happen. This is the case with Jayden. He has acted out a play to drive a car, as he knows he cannot drive a car in real life at his age. ?? ?? ?? ?? 1 Child Development ...read more.