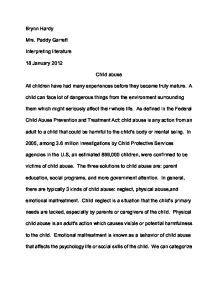 Child neglect is a situation that the childs primary needs are lacked, especially by parents or caregivers of the child. Physical child abuse is an adults action which causes visible or potential harmfulness to the child.

Brynn Hardy Mrs. Paddy Garrett Interpreting literature 18 January 2012 Child abuse All children have had many experiences before they became truly mature. A child can face lot of dangerous things from the environment surrounding them which might seriously affect their whole life. As defined in the Federal Child Abuse Prevention and Treatment Act: child abuse is any action from an adult to a child that could be harmful to the child's body or mental being. In 2005, among 3.6 million investigations by Child Protective Services agencies in the U.S, an estimated 899,000 children, were confirmed to be victims of child abuse. The three solutions to child abuse are: parent education, social programs, and more government attention. In general, there are typically 3 kinds of child abuse: neglect, physical abuse,and emotional maltreatment. Child neglect is a situation that the child's primary needs are lacked, especially by parents or caregivers of the child. Physical child abuse is an adult's action which causes visible or potential harmfulness to the child. ...read more.

The next reason of child abuse has come from ecological causes. Surely, a family under poverty conditions has always fought with serious problems in finance. Therefore, children from these families cannot receive enough daily food and education for developing into a healthy child. In addition, these children in poor-living conditions are easily becoming victims. As the figure from NDAS states, it is amazing to recognize that in the District of Columbia, the children in families living under poverty scale had increased from 23.4% in year 2000 to 32.6% in year 2006. Approximately 80% of families in Gaza have existed in poverty and have depended on food aid. Last but not least, child abuse has often occurred due to child's unexpected disabilities. Whenever a child is born with any weakness in its body, this unlucky child can be refused by connected parents. A minimum of 15% of children in the U.S. have suffered disabilities and the disabled child had a probability of 3.5 times of being abused compared to a normal child. ...read more.

Third, the government must pay specially attention to offering more welfare to child with a disability. With financial assistance from government, a child with disability will havemore opportunity being existent to social activities.Asyou can find at the National Deaf Children's Society - in U.K, the child with a disability of hearing might get a lot of benefits to overcome the deafsituation,forinstance: receiving child welfare,optionaleducation, providing audiology. In summary, whenever we do not take care of our children, it is easily for child abuse to happen. Although each man has own problems, but it is not fair ifwe throw all troubles to a child. In my opinions, child abuse is a complicated and sensible issue because it has just occurred when we have lost control of ourselves. Whatever thecausesof child abuse, themost important thing isadults' behavior. So, education is the best method for preventing child abuse. Through the training programs, adult might get a healthier life and children can have some skills of self protection. And I hope that in future children all over the world might keep away from child abuse. ...read more.