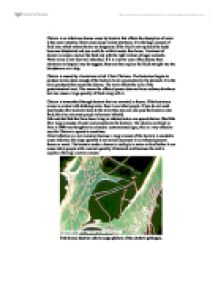 Cholera Cholera is an infectious disease cause by bacteria that affects the absorption of water in the small intestine. Sever cases cause violent diarrhoea. It is the huge amount of fluid loss, which makes cholera so dangerous. If the fluid is not replaced the body becomes dehydrated and you could die within twenty-four hours. Treatment of cholera is simple; replace the fluid lost with the right mixture of sugar and salts. Water alone is not very well absorbed. If it is a server case of the disease then admission to hospital may be suggest; they can then replace the fluids straight into the bloodstream via a drip. Cholera is caused by a bacterium called Vibrio Cholerea. The bacterium begins to produce toxins when enough of the bacteria have accumulated in the stomach. It is the toxin produced that causes the disease. The toxin affects the cells of the gastrointestinal tract. This means the affected person does not have ordinary diarrhoea but also losses a large quantity of fluid along with it. Cholera is transmitted through bacteria that are excreted in faeces. If the bacterium comes in contact with drinking water, then it can infect people. If you do not wash your hands after you have been to the toilet then you can also pass the bacteria onto food; this also can cause people to become infected. ...read more.

In 1992 a new strain of the cholera disease became apparent. This started the eight epidemic of the disease. Malaria holds a serious risk to health of people living in tropical countries and the number of cases has been on the increase since the 1970's. This increase is also due to the increase of foreign travel meaning the disease is brought back to this country when it has not been prevented before travel. Aids came apparent in 1981 but the infective HIV was recognised years before. Since HIV was discovered the numbers of infected people has risen. Tuberculosis is a threat in both developed and developing countries. It was once thought to have been eradicated, but this was found to be untrue. The social, economic and biological factors in the prevention and control of the named diseases. Cholera can be prevented from spreading by not drinking water that could be contaminated by the pathogen vibrio cholerea. In countries where swage is a problem and the people drink untreated water, such as places like Africa, Asia and South America, then the spread of the disease could be decreased if a proper swage and cleaning system was set up. However this may not be possible because of the lack of funds in the country. Also overcrowded living conditions contribute to the disease spreading because if an uncontaminated person comes in contact with the pathogen they to have a high chance of getting cholera. ...read more.

These include protein synthesis, synthesis of bacteria walls, plasma membrane function and enzyme actions. Most anti-biotics are made of living cells. However there are some drugs, such as isoniazid, which is used in the treatment of tuberculosis, which is synthetic. Finding the most effective type of anti-biotic for a disease is a fairly straight forward process. It involves growing the infection on an agar plate. Then filter paper disks, that contain the anti-biotic, are placed on the grown cells. You can tell which anti-biotic is the best by measuring the radius where no cells are growing around the filter paper. This photo shows how the selection process is done. Due to the overuse of anti-biotic some people or infections become immune to them. This makes the infection more difficult to treat and also decreases the patient's chances of survival in some cases. The cholera pathogen can be killed by using and anti-biotic, such as doxycycline, but sometimes this is not necessary if you are able to replace the fluids lost with salt water. Tuberculosis is treated with a combination of anti-biotics. A combination is needed to prevent the pathogen becoming resistant to it, which would cause serious consequences to the patient. AIDS / HIV are also treated with a combination of drugs. However anti-biotics do not kill of the infection, mealy slow down its effects. If the anti-biotics are not taken at the correct time of day then resistance to them may be caused. Malaria is not treated with anti-biotics. ...read more.