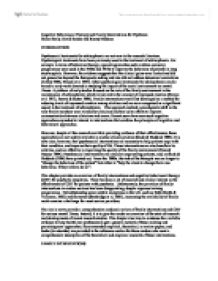 Cognitive Behavioural Therapy and Family Interventions for Psychosis Helen Healy, David Reader and Kenny Midence INTRODUCTION Psychosocial treatments for schizophrenia are not new in the research literature. Psychological treatments have been previously used in the treatment of schizophrenia. For example in terms of behaviour therapy, operant approaches such as token economy programmes were used in the 1960s and 1970s to improve the behaviour of patients in long stay hospitals. However, the evidence suggests that the clinical gains were limited and did not generalise beyond the therapeutic setting and also did not address delusional convictions (Alford 1986; Himadi et al 1991). Other psychological treatments for schizophrenia can be traced to early work devoted to studying the impact of the social environment on mental illness. A plethora of early studies focused on the role of the family environment in the maintenance of schizophrenia which in turn led to the concept of expressed emotion (Brown et al 1972; Brown & Rutter 1996). Family interventions were first developed as a method for reducing levels of expressed emotion among relatives and are now recognised as a significant aspect in the treatment of schizophrenia. This approach marked a paradigmatic shift in the way family members were viewed by clinicians and has led to efforts to improve communication between clinicians and carers. Recent years have seen such cognitive approaches expanded to interest in interventions that combine the principles of cognitive and behavioural approaches. However, despite all the research available providing evidence of their effectiveness, these approaches are not widely available in routine clinical practice (Slade & Haddock 1996). It is now clear, however, that psychosocial interventions are necessary to help patients cope with their condition, and improve their quality of life. These interventions are also beneficial to relatives, and are effective in improving the quality of the family environment (Penn & Mueser 1996). Psychosocial interventions are aimed at empowering patients, and, as Slade & Haddock (1996) ...read more.

All of the trials have been conducted in the UK, whereas none of the recent trials have taken place in the US. It is uncertain whether the results found would generalise to a different culture such as the US with a predominance of many ethnic minorities. Schizophrenia is associated with a number of cognitive deficits such as difficulty in concentrating, problem solving and other attentional deficits. Such impairments have significant implications for the success of cognitive behavioural therapy and there has been a long held view that psychotic patients are not amenable to cognitive therapy. Lack of insight is another reason that is also posited for their failure to engage. The results of other meta - analyses (Cormac et al 2002, Gould et al 2001) clearly demonstrate that this is not the case. For example Garety et al (1997) found that cognitive variables were not related to treatment response. Nevertheless given the nature of cognitive behaviour therapy, a certain degree of insight and willingness to disclose symptoms are necessary prerequisites to engage in cognitive therapy (Chadwick et al., 1996). Thus those patients who are more severely deluded and suffering from marked negative symptoms of depression and withdrawal may not benefit from such a psychological approach. This hypothesis is supported by findings from Garety et al (1997) where he found that a greater insight did predict a better outcome among patients randomised to CBT therapy. Identification of therapeutically relevant factors is very important in order to be able to implement them in clinical practice. A recent study by Andres et al (2003) investigated the significance of coping as a therapeutic variable for the outcome of purely psychoeducational and behavioural therapy in schizophrenia. They demonstrated that better outcomes in terms of psychopathology and social outcome was best predicted by the patient's mastery of active problem focused strategies, levels of cognizance about the disorder, and levels of social functioning. ...read more.