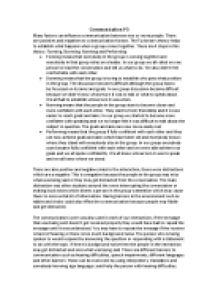 ﻿Communication P3 Many factors can influence communication between two or more people. There are positives and negatives to communication factors. The Tuckman?s theory helps to establish what happens when a group comes together. There are 4 steps in this theory. Forming, Storming, Norming and Performing. 1. Forming means that everybody in the group is coming together and everybody in that group relies on a leader. In our group we all relied on one person to lead the conversation and tell us what to do. We also didn?t feel comfortable with each other. 2. Storming means that the group is trying to establish who gets what position in the group. The discussion becomes difficult although the group has to be focussed on its aims and goals. In our group discussion became difficult because we didn?t know whose turn it was to talk or what to speak about. ...read more.

This is a negative because the people in the group may miss what was being said or they may get distracted from the conversation. The main distraction was other students around the room interrupting the conversation or making loud noises which diverts a person in the group?s attention which may cause them to miss a vital bit of information. Having barriers in the environment such as tables and chairs could also effect the communication because people may fiddle and get distracted. The communication cycle was also used in each of our interactions. If the message that was being sent doesn?t get received properly they would have had to repeat the message until it was understood. You may have to repeat the message if the receiver is hard of hearing or there is too much background noise. The person who is being spoken to would respond by answering the question or responding with a statement to do with the topic. ...read more.

Music and drama is also a form of communication because it gets the point across to people in a fun and simple way. If somebody is deaf then somebody that can do sign language can communicate with them and understand what they are trying to say. Also Braille can be used when somebody is blind. Technology can be a good way of communicating with people around the world; technology can mean phones and computers. There are also different types of interactions which are complex, sensitive and simple. Having a complex conversation could be about making a care plan for a relative or talking about medical conditions with doctors. Having a sensitive conversation with someone could mean talking about somebody dying or something which may upset somebody. Having a simple conversation could simply be ?hello, how are you? with a friend or a relative. Simple interactions are used in every day life with everybody you meet. Ilona Stephenson. Health and Social Care Level 3 Year 1. ...read more.