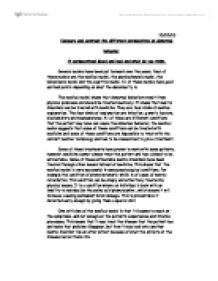 Compare and contrast the different perspectives on abnormal behavior (4 perspectives) Good and bad and what do you think.

10/02/03 Compare and contrast the different perspectives on abnormal behavior (4 perspectives) Good and bad and what do you think. Several models have been put forward over the years. Four of these models are the medical model, the psychodynamic model, the behavioural model and the cognitive model. All of these models have good and bad points depending on what the abnormality is. The medical model shows that abnormal behaviors result from physical problems and should be treated medically. It shows that mental disorders can be treated with medicine. They are four kinds of medical explanation. The four kinds of explanation are infection, genetic factors, biochemistry and neuroanatomy. All of these are different conditions that the patient may have can cause the abnormal behavior, the medical model suggests that some of these conditions can be treated with medicine and some of these conditions are impossible to treat with the current medical technology and has to be researched to give a treatment. Some of these treatments have proven to work with some patients, however, medicine cannot always treat the patient and has claimed to be untreatable. Some of these untreatable mental disorders have been treated through other means instead of medicine. This shows that the medical model is very successful in some psychological conditions. For example the condition of phenylketonuria which is of cause of mental retardation. ...read more.

This model would be an effective treatment if it were successful as it is unlikely that the problem or any side effects would occur after the treatment. The problem with this treatment is that it take a long period of time and is unreliable as the therapist has to determine what the thought or dream that the patient explained means and the interpretation might be wrong, and so the therapy will be unsuccessful. Other problems with this model are that the adult experiences are ignored and sometimes the cause of the mental disorder could be because of some crisis in adulthood. Freud also believed that any s****l problems caused any disorder that may have, when actually the s****l problem may be the result of poor relationships with other rather that the cause of the disorder. This model maybe ok if the medical model fails. Another model that can be used is the behavioural model, which is based upon the social learning theory. This means that the abnormal behaviour is caused because of either watching other people do things and are rewarded for it or the patient does abnormal things and is rewarded for it in some way. This would cause the patient to do the abnormal behaviour more often. An example of this is loosing weight and getting a complement for it or getting more attention because you look thinner. ...read more.

This will make the patient realise how ridiculous the question is. This will hopefully make the patient realise how rational they are being and no longer be afraid of spiders. The cognitive model emphasised internal, mental influences and the power of the individual to shape their own thinking, which make this model good for treating some patients. A bad point about this model is that its approach to abnormality is rather limited as genetic factors are ignored and life experiences are paid little attention to. All of these models are good at treating their own type of mental disorders. Such as schizophrenia can only be treatable using the medical model because this is a physical disorder as part of the brain is damaged. Therefore, when a patient has a medical disorder, I think it would be worth checking that the patient has no physical disorder such as brain damage by doing a cat scan, as the medical model would give a fast diagnosis and have fast results on the patient. If there is no physical problem with the patient, then the medical model has no way to treat the patient, and so the patient has to use other means by using another model. The patient would have to be analysed beforehand to decide what treatment would be best for the patients particular condition, however, this may take a long period of time as the other treatments do not give very fast results and finding the problem would also take some time. ...read more.